I've been testing arc welder, and observed literally no difference between with and without prints.
Please see the attached print (and the artefacts due to using smaller straight lines instead of arcs). Actually this one is the one printer after arc welder processing.

I was expecting arc welder to fix this, by replacing these smaller segments with larger arcs.

Am I doing something wrong ? Or just expecting too much ? 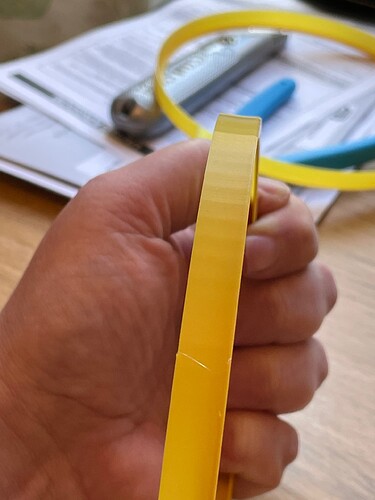 How does the stl file look like? If it too coarse, arc welder can't anything against it.

You may share the stl as well the gcode file.

STL was the same indeed. Thanks a lot, I increased the mesh density when exporting from Fusion 360, now the segments are not noticeable with or without Arc Welder.

There are a couple plugin settings you can change, if you increase the resolution it will allow the path of the arc to deviate further from the two tangent lines. The default is very small (.05mm which is +/- 0.025mm from the line).

As others have noted. It kight be the stl file itself and that the file itself is blocky and not rounded. Thus, when sliced it is too blocky. You might be able to increase the resolution of arc welder.

I persinally have seen quality improvements, but the more noticeable effect was speed. Rather than 100s of small straight lines, I have single circular curves, thus fewer gcode co.mands are sent and the printer isn't overloaded at high speeds.

I personally don't print without it, except when doing test prints such as temperature towers etc etc.