I just installed the RasPi Zero W in my Prusa MK3, flashed newest OctoPi/Print. No customization outside standard configuration per Prusa. I've tried 3 times including a fresh re-flash and I can't get this plugin to install. It runs a while like expected but then fails and looks like OctoPrint crashes because the UI is unresponsive.

Is some system timeout killing the process?? I'm not a linux expert so not sure there...

We've spoken many times here about the Prusa + Zero combination. I've personally posted on the Prusa forum about the configuration requirements that they failed to mention to their own users. Foosel has indicated here that they should have consulted her before suggesting a one-core Raspi with half the RAM.

Do yourself a favor and setup a Raspberry 3B for the job. It doesn't look as snazzy as the Pi Zero slammed onto the Einsy board but it simply works.

It doesn't look as snazzy as the Pi Zero slammed onto the Einsy board but it simply works.

And it also won't get nuked its file system the first time you accidentally power off the printer (and thus also the Pi) before properly shutting down the system.

I was kinda thinking that it was specification related since I haven't seen any open items on GitHub. I also read on the actual Octoprint that the Zero wasn't recommended so I'm not shocked at all by the feedback here.

I'm a Windows software guy and really this is my first dive into RasPi stuff so as long as this Zero does its job as a OS I'm happy.... just gotta be aware of Plugin support requirements.

Thanks for the feedback!

That specific plugin requires a Python dependency called numpy which can take a long time to install due to some stuff having to be compiled, which can be bog slow - even more so on a 0 than on a beefier version. Try to simply wait really long, maybe it'll work out after two or so hours.

But really, do yourself a favor and get a Pi3, it's not only the plugin requirements that will cause you sadness with a 0. The way its wifi interface is attached causes hilarious CPU load on network traffic, so forget about webcam integration or really just uploading or downloading (e.g. for GCODE viewing!) any larger files while printing.

Pi-Zero is a very wimpy Pi. I suspect that the plugin-in might not be able to run in the smaller device due to its size and complexity.

That specific plugin requires a Python dependency called numpy which can take a long time to install due to some stuff having to be compiled, which can be bog slow - even more so on a 0 than on a beefier version. Try to simply wait really long, maybe it'll work out after two or so hours.

I have successfully installed my plugin on the Pi Zero, but as mentioned above, the resources to compile numpy are very lacking in the Zero. You may have better experience installing numpy outside of the OctoPrint side of things ahead of time and then install the plugin after. It will still take 2+ hours to complete.

There are several closed issues posted on my plugin's repo about this. You may find some additional information in one of those. One of interest would be this one.

Hello together! I want to install Bed Visualizer for the first time on my Octopi (latest Version), but the installation always hangs...

I remember numpy installing in about 25 minutes on a 3B, for what it's worth.

I'll check that out, thanks. I'll do the numpy install with SSH and try the plugin again later. I'll post back the results (=

I did order a RPi3B+ Cana kit today on Amazon. I'm printing out the MK3 boxes now which I hope are the same for the MK3S (/sigh). I'm just getting into Rasp PI stuff so I'm not sure what ribbon or pin cables to hook things up. I'm in no rush so I'll figure it out as I go... part of the fun!

Make sure that you're installing numpy having activated the virtual environment first.

Perfect! Thank you. I have to deal with a Linux system/Sybase about 5% of the time and Windows Servers/SQL Server the other 95% at my work and I'm always looking up my notes just get the data I need.

Took about 1:45 for the NumPy install and about 30 seconds for the plugin install... 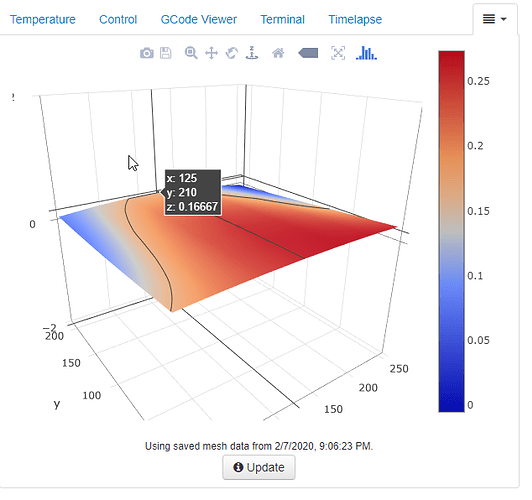