ive seen a BLTouch plugin, just wondering if theres anything out there or a way to get octoprint to see the CRTouch on my Ender 3 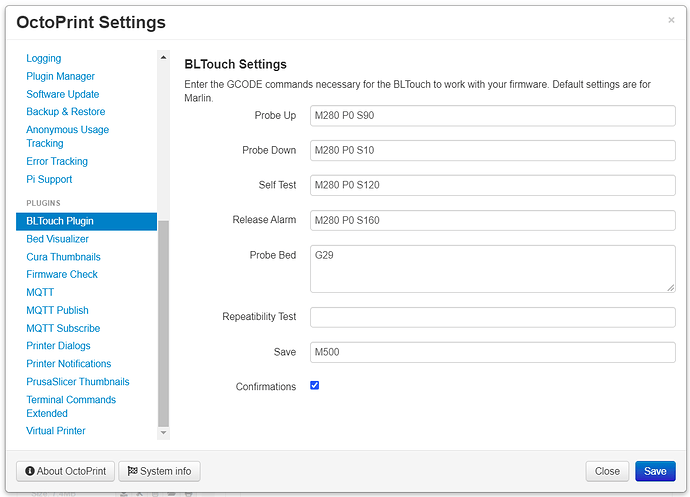 Since the CRTouch is more or less the same as a BLTouch it should also work with the plugin.

thanks for the reply, im not sure it just works like that as ive seen a few recent posts to octo, such as on reddit regarding the bltouch vs crtouch on octoprint

has this changed now so if i install the bltouch plugin and use the default marlin settings it should work?

Creality doesn't offer a different firmware for CRTouches so I'm pretty sure there should no difference for the end user.

Creality sometimes does weird stuff with their firmwares but I don't think that they changed something on that end.

But just for your information - you don't need this plugin at all. It's not like a driver for hardware in your pc. It's just those buttons:

So I guess the user on reddit did something else wrong - it was not related to the plugin.

yes they do, very bottom under accessories firmware. unless I'm mistaking the original ask

It's just labelled differently, saves people contacting them asking for cr touch firmware, totally get that..the firmware is definitely the same in configuration and adv etc for cr and bl. Even though the cr has an optical sensor, as opposed to a Hall sensor, which I prefer, There's nothing within the firmware that differentiates the principles used in either. That's what I got back from creality anyway.. I believe weezl is correct, the firmware just addresses xyz and offsets etc