Does anyone know if the Enclosure plugin is still being maintained? It's been a couple of months since @vitormhenrique has acknowledged a bug report or feature request.

I'm just trying to understand whether I should wait for Enclosure plugin maintenance or "solidify" my own efforts. 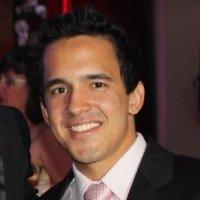 OctoPrint Enclosure Plugin. Contribute to vitormhenrique/OctoPrint-Enclosure development by creating an account on GitHub.

Some devs don't work on the code all the time and instead do it when motivated(I'm one of them), Doesn't seem like the case here though.

That is not true, I updated few issues few months (weeks) ago, as well had a big warning on the main page saying that I broke both bones of my left arm, and had a long way to recovery.

If you actually see the development branch I'm working on a total new version of the plugin from scratch, to be python 3 compatible, easier to use and with many more features.

I have a full time job, and programing was just a thing that i did for fun, but now I'm doing a masters on Computer Science, working on a startup company and so many different projects that is hard to get everything done...

That's why I linked it. You should push that README to master

OMG, haven't realized that it wasn't on master! I was definitely high on pain killers! thanks @kantlivelong

My apologies, @vitormhenrique! I hadn't seen any activity. I guess I just didn't know where to look. I hope you're well on your way to a full recovery.

I'm using the Enclosure plugin to control three SUNLU filament dryers each with a BME280 Qwiic I2C temperature / humidity sensor and fan. The three BME280 sensors required I introduce an eight-channel Qwiic I2C mux. I'm using a single 30 VDC / 10 Amp power supply (in place of the individual SUNLU 24 VDC power supplies) and I've been able to increase the SUNLU maximum temperature from 55oC to 70oC. The SUNLU heating elements and fans are controlled via a pair of quad Qwiic I2C relays. 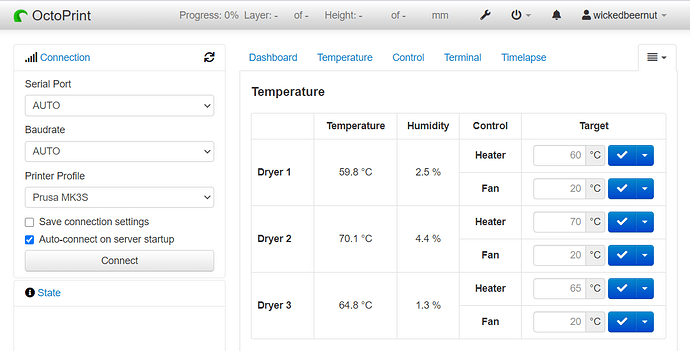 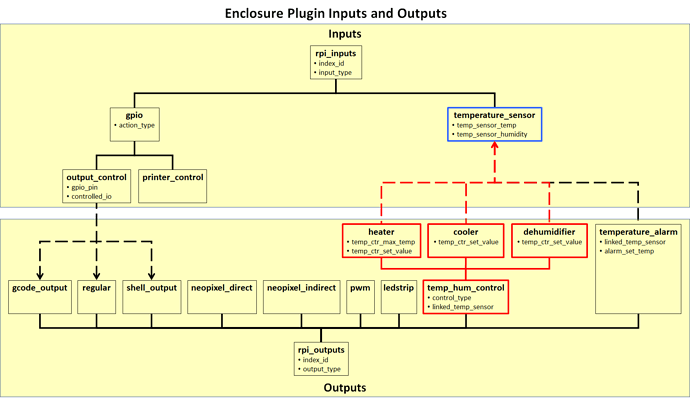