To add either the full IP or the last IP .segment to the NavBar

Or perhaps even rolling over the Octorpitn logo or printer name on the navbar... Any quick solution would help!

EDIT: Well I guess I somewhat get the same effect rolling over the TABs hmmmm not as polite but OK.

Nice idea!
Maybe @Laze can add it to the Top Temp plugin.

Go to OctoPrint Settings, Appearance and you can set the title and the color to anything you want including the IP address (or part of it).

Personally, I would make sure the hostname of each printer in my farm was unique and use the hostname in the title rather than the IP address.

Re appearances, that asumes the ip is being displayed already? Am I missing something then?

ipOnConnect plugin will display the IP on the printer when it connects to OctoPrint. That in combination with portlister (incorporated into next OctoPrint 1.9.0 release) and auto-connect on printer you can just power cycle the printer. Other ways to differentiate are through UI Customizer themes, or CustomBackgrounds plugin for temperature graph.

Oh and I totally forgot, I have an unlisted plugin that puts in the header... 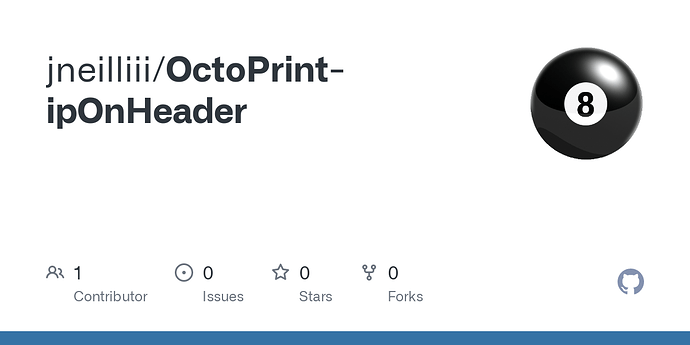 Contribute to jneilliii/OctoPrint-ipOnHeader development by creating an account on GitHub.

This plugin adjusts the appearance name that @b-morgan was talking about.

Maybe I'm confused... You are asking for the IP address to be displayed in the browser after you have already opened OctoPrint in the browser. To me that means you want to know which OctoPrint (printer) you are connected to.

If I'm right, then I'm suggesting that you use the Appearance setting to either add color or add a title (the hostname?, the IP?) to the OctoPrint you have already opened so you know which OctoPrint it is. If each OctoPrint / printer in your farm has a unique color or unique title then your problem is solved.

What am I missing?

Yes, my OctoPrint farm "browser" is a plethora of rainbow colors

One for each printer, but sometimes, I need to SSH or VNC a specific IP or hostname, just wanted to have the options...

So yours is based on me NAMING the "printer" as IP right? I mean there's no solution to show the IP in text form in the navbar unless you type it, right?

this plugin: GitHub - jneilliii/OctoPrint-ipOnHeader will do that for you...

Thanks but isnt that to display the IP on the LCD of the printer?

What you mean is this:

Just try the plugin of @jneilliii

Notice the difference between the two...OctoPrint-ipOnHeader is the one you are wanting to try out.

ahhhh got it, is tehre a way to make it cohexist? aka %NAMEOFTHEPRINTER%+%IP%? or something like that?

not without programming effort/time

if your network is solid and these are running off of separate pis then why not just change the hostname of each pi to match each individual printer somehow and then just set the hostname in that appearance > name setting. Then you can just access the SSH/UI via the hostname.

Yeah, KISS rule for everyone