I understand that most printers' firmware doesn't support reading these parameters from the printer, and OctoPrint can't control that.

It would be simple for the Octoprint to cache the last value sent to the printer in an internal variable, and display those values in the Feed Rate and Flow Rate boxes.Initialize with 100% when OctoPrint starts. Any time the user changes the value either by typing in a new number or clicking the up/down arrows, update the cache variable as part of the routine that sends the new value to the printer. It would make those features much more user friendly.

This might be of interest. It would be fairly trivial to modify this plugin to support intercepting the M106 commands with gcode sent hook and setting the value in the UI, as well as gcode received hook for people that have enable fan reporting, which will echo the set speed when it happens from the LCD. 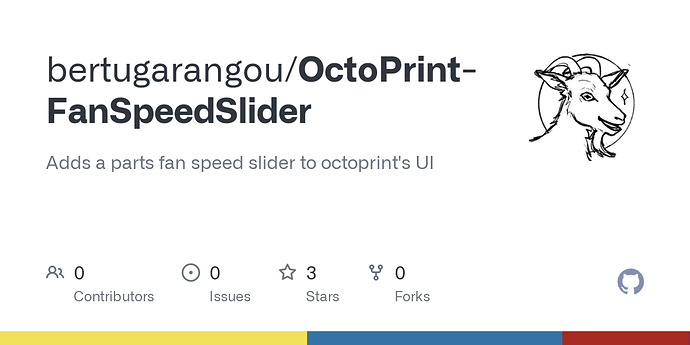 Adds a parts fan speed slider to octoprint's UI. Contribute to bertugarangou/OctoPrint-FanSpeedSlider development by creating an account on GitHub.

After looking at the forked code linked in the post above I think this will actually remember what you set the speed to from the UI already. I did a quick fork that I haven't tested yet but should in theory work. You can find it here: GitHub - jneilliii/OctoPrint-FanSpeedSlider: Adds a parts fan speed slider to octoprint's UI I haven't tested it or verified it works properly, but could tomorrow maybe.

This is how the feature used to work a couple of years ago but it still caused too much confusion.

When users change the value on the printers display, it doesn't update in OctoPrint as expected, which caused a lot of confusion and questions.

You can probably search and find several discussions about the topic, but it definitely won't go back to a half-baked solution.

yeah, that's why the plugin exists and my fork would allow for that assuming REPORT_FAN_CHANGE is enabled in Marlin.

I'm confused... The OP is asking about Feed and Flow Rate and the responses are almost all talking about Fan Speed.

My response was, while not explicit, aimed at feed & flow rate reporting.

my bad @b-morgan I totally overlooked that as I was remembering the sliders of the old version of OctoPrint...for these.

@Charlie_Powell @jneilliii, Its all good as long as @jonwienke understands there's not much that can be done. These two variables are essentially "write only" and can be tweaked from both sides (the LCD connected to the firmware and from OctoPrint via gcode).

This is one of my pet peeves with Marlin. I believe that anything that is "settable" should be "readable".