Feedback on the "Instructions for setting up vscode IDE" PR

Hi i just wanted to post this here, i was not sure if it got read on the merged pull request.

I'll start with the comments from the PR

The first part is intended as a more 'general' install guide, and it's noted that OS specific steps are detailed below. But I will agree that there's some duplication there, that maybe is better left out rather than mentioned twice. If you want to clean it up, you can send in a PR at any time, because otherwise it might be a while before anyone else gets to it.

Some last thing. If i would like to switch from python 2 to 3 and versa in vsc. Would i need to have like two setting.json files? Because of the "python.defaultInterpreterPath": "venv3/bin/python",

The way I would manage this is to have multiple 'Run/Debug' configurations which would allow you to pick one before you run OctoPrint, this is how I have some of mine setup for PyCharm. The default interpreter path just means default, you can usually change this quickly at the bottom of the screen: 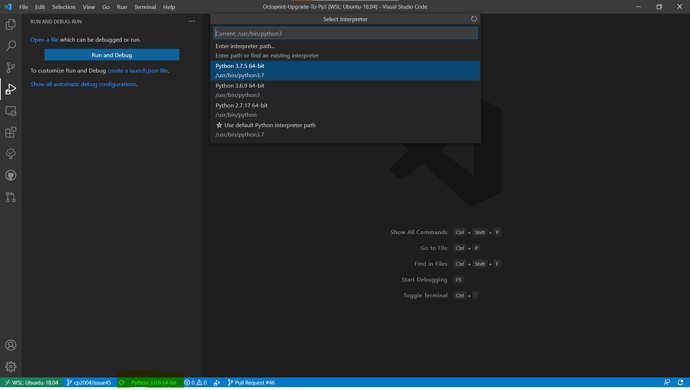 Not really possible, since you are running OctoPrint manually out of VSCode you can't control it in the same way you can with the service files.

Thank you for your reply.
I will look if i can make a PR. We can just discuss and change maybe the PR on github then.