i am not new to 3d printing but very new to octopi and my raspberry pi3.

so just to let you know i am ok on a computer but i am a gas engineer so im not to savvy LOL.

right the problem im having. i have got the raspberry set up and working fine BUT..... as soon as i etch octopi on to my sd card and put it back in the pi i get, the 4 raspberrys in the top left, black screen with a load of data / system checks running down the page. i have tried everything i can think of but like i said i am not great on a computer i cant work this one out and cant find nothing online.

hope someone has had the same problem so i can get this issue put to rest !

thank you in advance 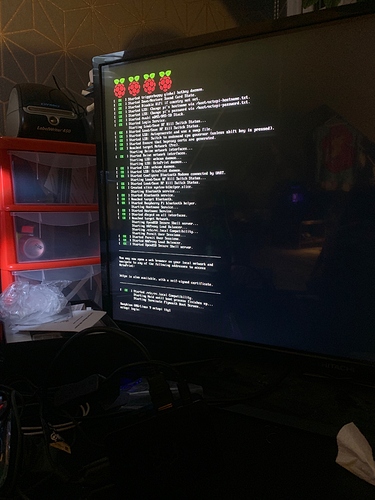 What you see there is the console.
You are supposed to enter the username (pi) and the password (raspberry) to log in.

Most people would use octoprint/octopi headless -> without a display and controlled over your home network.
If this is what you want to do you can either put an ethernet cable connected to your router into the pi or setup wifi.
After your pi has connected to the network you can reach it with its ip. Just enter the ip or http://octoprint.local in your browsers adress bar and it should connect to the octoprint webinterface.

Here is a tutorial how to set up wifi.

If you want to use it as a desktop you should know first that older raspberry models are a bit lowpowered and won't give you a great desktop experience.
Preferable for desktop is at least a pi 3 and for the best experience a pi 4 with 2GB/4GB.

For desktop usage you also connect the pi first to your network and login with the console login (pi | raspberry).
I'm not sure if the octoprint image includes the desktop and can't test it right now so we install it to be sure.
Enter this

Log in again.
Then enter sudo raspi-config.
Choose Boot options -> Desktop / Cli
-> Desktop Autologin
Press tab and navigate to finish. Do the reboot and it should boot to the desktop

If you got stuck at some point let me know

As @PrintedWeezl said: you need a network connection.

As I can see on your screenshot, your Raspberry Pi ha no connection.
Connect to your local network and reboot your Pi, the you should get the LAN addresses of your Pi provided between the dashed lines at the end.

You've already got the hard part done (by correctly burning the OctoPi image to your SD card). You do not need to log in to the Pi. In fact, you don't even need a screen and keyboard attached to it, unless you want to verify that the Pi is booting correctly or trouble shoot a problem (the screen and keyboard can be handy for adjusting other advance parameters, but there are other ways to do that as well). OctoPrint is designed to be a server, which allows you to monitor/access/control your printer from other computers on your local network. So normally, you would not log on to the Pi itself to utilize OctoPrint, you'd use a web browser on another computer.

I would recommend against installing the desktop (which makes the Pi "look like" other computers you may be more familiar with). Running the desktop consumes some of the PI's resources - resources which are better left devoted to running your 3D printer or driving a camera so you can monitor your printer remotely. On some Pis and in some situations, it will still work fine with the desktop installed, but a number of people have reported issues with print quality when the Pi is loaded down with other tasks. (Plenty of people run the desktop on their Pi with satisfactory results, but if you are new to this, I suggest starting out with a "plain vanilla" installation.) If you have installed the desktop, and decide you do not want to run it, you can shut it off by following the instruction in the second to last paragraph of PrintedWeezl's post, but changing the last step from Desktop Autologin to CLI or Command Line Interface (I don't have a Pi in front of me right now to know the exact phrase). This does not remove the files from the SD card which run the desktop, it just tells the Pi to ignore them and boot to the Command Line (freeing up the resources that running the desktop consumes).

As @PrintedWeezl and @Ewald_Ikemann noted, it appears your Pi is not connected to your network (either through WiFi or ethernet connection). If you want to access OctoPrint over a WiFi network, did you edit the octopi-wpa-supplicant.txt file on your SD card while it was inserted in your computer to add your WiFi information before inserting the SD Card in the Pi? There are ways to do this from your Pi, but most people (especially those not familiar with Raspian's commands and the included text editor) find it easier to insert the SD card in their computer and do it from there.

Do NOT remove the SD card from your Pi while it is powered up. Doing so risks damaging your SD card. You might get away with simply shutting down the power to the Pi, once it has finished its boot up procedure (which it has done in your screen shot). However, it's best to shut down your Pi properly, if it's not already shut down. To do that, you'll need to log in. If you haven't changed the Username and Password, just enter pi at the login prompt and raspberry when asked for the password (note the spelling on "raspberry". It trips up a few people). Once logged in, enter sudo shutdown -h now to properly shut down the Pi. The Pi may ask you for your sudo password. Just enter raspberry again (or whatever you changed your password to.) It takes a few moments to go through the shutdown process. Wait until the green light on the Pi has stopped flashing (there is a series of multiple quick flashes in a row just befor eit completes the shutdown process). It's now safe to power off your Pi and then remove the SD card.

FYI: in normal operation, when accessing OctoPrint from a web browser on another computer, the shutdown process is much simpler: there is a menu command for "shutdown" which will send the appropriate command to the Pi.

Once your SD card is out, reinsert it in the computer and follow the WiFi Setup and Troubleshooting guide (the same one that @PrintedWeezl linked above). Refer to the "Basic Setup - Edit Info to Log On to Your WiFi Network" section near the top of this file. If you follow those instructions carefully (including using the proper text editor to make the changes, as noted in that guide), that should be all you need. The rest is just troubleshooting information if you have problems.

Thank you so much John. Really appreciate your help. Once I am home I will have a go! I will let you know the results!

Thank you for your help. Much appreciated!