Could we get this working with the duet? This page describes the RepRapFirmware supported G-codes, originally based on the information from the RepRap wiki G-code page.

Could this be implemented into the duet's firmware? I would like to use the spaghetti detective on octoprint but still maintain the features of the duet that would other wise be disabled like my filament sensor. If they could play nice together I...

That's going to have to be done by the Duet firmware folks. We have no control over what they do.

BTW, there is a plugin that will allow you to handle custom action commands if the Duet firmware doesn't use already supported commands... 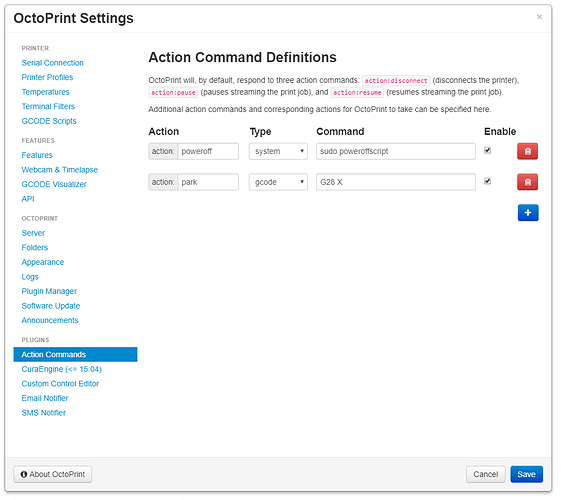 Adds handling for custom action commands to OctoPrint. Action commands are sent from the RepRap machine in the form //action:command.

If it's mentioned in the documentation, it might be an optional feature that has to be enabled. Not sure how that works for the Duet/RepRapFW

It might ne python 2 only, check their github repo and see if there is an issue, and potentially other forks that have been made python 3 compatible.

I was confused and didn't realize that was not the pre-installed plugin but an additional one. It seems that duet at the moment only supports 3 commands.

" On the latest version of Pronterface and Octoprint (1.2.0+) a special comment of the form:
// action:command
is allowed to be sent from the firmware, the command can currently be pause, resume or disconnect which will execute those commands on the host."

Those are handled by the default bundled Action Commands plugin for sure. So it would just be a matter of configuring your runout to send the pause action. Not sure how to do that in RepRap Firmware but hopefully that gives you something to search for how to do.