Late last year, I posted a print for a Raspbery Pi Case that had an option for an OLED display. Shortly after posting, user MyStoopidStuff posted an awesome remix that incorporated two tactile buttons into the module. Since that remix, I have been going down a rabbit hole.

Initially, I just wanted to be able to reconnect Octoprint to my printer if it disconnected with a single button press. However, after seeing octoprint's REST API documentation, I have since written a python module that simplifies communicating with octoprint via python (NOT through a plug-in). Because it is not a plugin, it can run on a Raspi without octoprint. It has the ability to communicate with any printer on the network running octoprint; kind of like a universal remote. This includes running multiple commands on multiple printers with a single button push. ie, start multiple jobs at once, run a certain gcode command, pause all prints, etc. Really, it is limited only by someones imagination (and coding skills).

I was considering making a case for a Pi Zero that integrates a 128x32 OLED, 2 buttons, and a li-polymer battery. But felt I may be investing a bunch of time in something that either already exists, or nobody would use. A buddy suggested posting this on a forum and getting feedback, so I am doing just that. Does anyone see any value in something like this? I know there are several smartphone and other octoprint plugins. Would there be any advantage to doing it on a stand alone Pi?

In the video below, upon booting, the Pi runs through all of the Printers (URL and API's) in the config file, tests connectivity, and retrieves their name, raspi status, and printer status. I have 4 printers stored in the config file. First, I connect to the Mini which is connected via USB to the raspi I am running the OLED/buttons on. Then, I switch to control a MK3S which is on the same network.

I think that's a cool project. Wondering if you had seen OctoPrint Micro Panel which works with a slightly larger OLED. May get some inspiration from that, specifically the open PR.

Nice... At $8 I'm surprised not more people are jumping on this cute little display.

Without question, I would totally use your STL if you designed one for the smaller display. You will be saving me from hours of caliper and prototyping time.

I've got the little display running (poorly) in a fork of the plugin @jneilliii mentioned. Initially I thought it would be as simple as cloning the existing panel and resizing it but there are some limitations within the current object model that prevent it from being cut and dry

With that said, I was able to hack the existing classes to fit the smaller form factor after about 30 minutes of messing around.

I plan to keep chipping away at it in the coming days.

Shame... I think we are talking about different displays. Mine does not have buttons and is monochrome.

Pretty sure the tactile momentary buttons are a separate unit from the OLED itself. It's the case that puts it all together...and the pi of course. Could probably do it without a pi and use an esp32 and micropython and achieve the same thing maybe?

I've seen this case too. this is the one where the variations got so extensive that the creator moved it to prusa because thingiverse too big of a PITA to keep his files organized?

hereis the little one I'm playing with and I'm using it with a pi zero 2w: 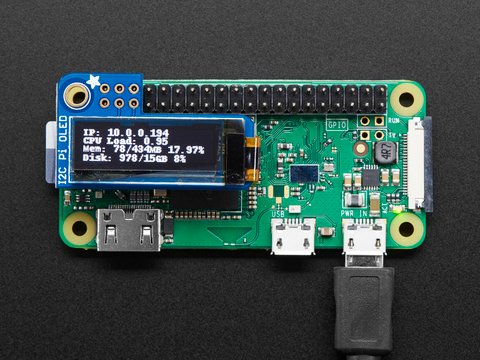 If you're looking for the most compact li'l display for a Raspberry Pi (most likely a Pi Zero) project, this might be just the thing you need!The Adafruit 128x32 PiOLED is ...

I think that's a cool project. Wondering if you had seen OctoPrint Micro Panel which works with a slightly larger OLED. May get some inspiration from that, specifically the open PR.

Thank you! I did, that was the one that inspired me to go down the route of making an octoprint plugin, which evolved into a stand-alone program.

Shame... I think we are talking about different displays. Mine does not have buttons and is monochrome.

MyStoopidStuff came up with a very creative way to mount normal Tactile buttons to my RaspiCase. So the OLED and the buttons all snap in. The only part that may be an issue for some is soldering dupont cables to the tactile button leads.

Could probably do it without a pi and use an esp32 and micropython and achieve the same thing maybe?

I love that idea! Especially since many versions have a battery port and Lipo charger built into the board. I've only done C++ on the ESP32 so I'd have to do some learning!

this is the one where the variations got so extensive that the creator moved it to prusa because thingiverse too big of a PITA to keep his files organized?

Yup - That was me. After the umpteenth message / comment from users complaining about confusion, I decided I'd never put a design with more than a few files on thingiverse again. Such a shame - I love Thingiverse. And awesome find on that OLED Pi hat!

FWIW, I succumbed to the lure of amazon last night and bought the displays linked in the blog post you shared.... so yeah. I'm game here... just may forego the button aspects of it.

I will keep you posted! I posted on both Prusa's site and OP's site, and there was little interest. So I may put this on the back burner.