On the Fence about OctoPrint

Looking at OctoPrint and have a few questions.

Can it detect birds nesting and other errors and shutdown?
Setting up a scale for my reel so running out isn't an issue.
Twisted filament that can't feed is an occasional issue.

Is USB vs SD card an issue?

My current workflow is
Solidworks prt to stl.
Matterhakers to position,copy, and slice.
Export to SD card
Sneaker-net to printer
Print

OctoPrint would get rid of the sneakers.
Remote monitoring doesn't do anything for me. Just want to print and forget (i.e. go to bed)
Just sucks waking up and finding a birds nest or some other issue.
Any other advantages?

Give it a shot and see if you like it. I personally don't print from SD as it's slow to transfer and it limits functionality.

How are you getting twisted filament? If you are taking it straight off the roll there's no way for that to happen.

You can upload to the SD card through octoprint, eliminating that transfer step.

But if you don't think it helps your workflow, don't use it.

Can it detect birds nesting

With the Spaghetti Detective plugin it theoretically is able to detect this and stop the print.

Twisted filament that can't feed is an occasional issue.

I've thought a lot about all this and written about it. Part of the problem is the shape of the filament roll itself which leads to cross-threading. There was a time when I'd re-spool my filament in an attempt to avoid this. My latest filament holder project though minimizes this by moving the spools high and out from the printer. It's then more like the take-up on a sewing machine, in other words.

Alternately for you, you could get one of those SD cards which incorporate wifi in them.

Alternately for you, there are times when you can mount that SD card within Raspbian so that you can access it directly. I use usbmount on my image so that I can access the SD card direction on my Smoothieware board, for instance.

How are you getting twisted filament? If you are taking it straight off the roll there's no way for that to happen.

I've gotten some bad filament from makergeeks that won't come of the reel cleanly. Sucks to come back to a print that has failed solely from reel issues. Literally the resistance of unreeling the filament overcomes the extruder drive.

The question on SD cards is using an SD card allow a more reliable print at a higher speed?

Will check out "Spaghetti Detective plugin" thanks

That can be detected with a wheel encoder which will verify feed-rate and also double as a run out sensor.

That can be detected with a wheel encoder which will verify feed-rate and also double as a run out sensor.

Pardon my ignorance.
So will OctoPrint support an encoder?

Spaghetti Detective looks interesting but it's not local.
Kinda loathe web based solutions. They can go away way too easily.

There are a handful of plugins but I'm not sure if they support a wheel encoder. It's certainly possible and likely fairly easy to write though. But I'd wager you don't have that feature right now so if anything OctoPrint makes it possible.

Same goes for failed print detection. Do you have that now? OctoPrint makes it possible.

True, true... I just need to source and buy one of those to play with it.

My inventiveness and my printing success would be graphed like this. 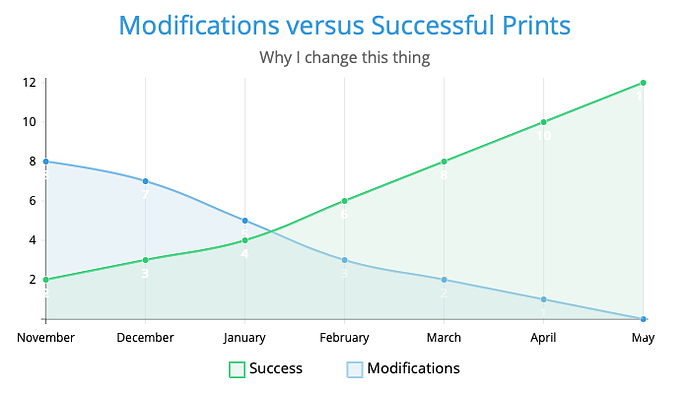 It's amazing you actually received filament from Makergeeks, at any quality.

It's amazing you actually received filament from Makergeeks, at any quality.

The Crap from MG I'm using now was actually free. Placed an order and was jerked around so long I did a charge back on my CC. They ended up finally shipping the order after I did the charge back and told me to keep it. I should have just thrown it in the trash the filament was so bad.

Spaghetti Detective looks interesting but it's not local.

You can actually run your own server it communicates with and keep it local.

OctoPrint plugin that works with The Spaghetti Detective Showcase

I'm running TSD server on fedora but centos will work too. TSD server is in the docker container so brings all it's dependencies with it. You just need to install docker support for centos. Note that self hosted TSD server does not have training so you are still dependent on them to train the matrix and you to update the matrix when you update the server.

So will OctoPrint support an encoder?

most printer boards do support it. I tested on smoothieware and duet2ethernet but I'm sure there's marlin and klippert support too, you just need a free input pin

the "retract too much" so that filament go over the spool and fall over it on the side is the real issue here. The only real solution I found for this is on ultimaker filament box where they actually have motor on the spool holder so they reverse the spool to tighten it. I use 2kg spools and this is almost never an issue, the amount of retraction you would have to do is just too much to be a real threat

the issue I do have is with master spool

the way master spool "fill" is coiled when you refil the master spool and close it the filament can be stuck between side of the master spool and rest of the filament and it takes a lot of force to release it. BMG does it properly but if your spool is not held forcefully but is for e.g. rolling on those 4 bearing thingy it will ride from the bearings and not uncoil, and when your spool is a meter above the printer on the shelf that's ~2kg of plastic falling one meter on your printer breaking everything in it's path

don't ask me how I know

Too bad we don't have an old-school clutch system like they had on the Teletypewriter's drive shaft. You could adjust the back-rotation a little as required. This is my printer right now, some four hours into a print. 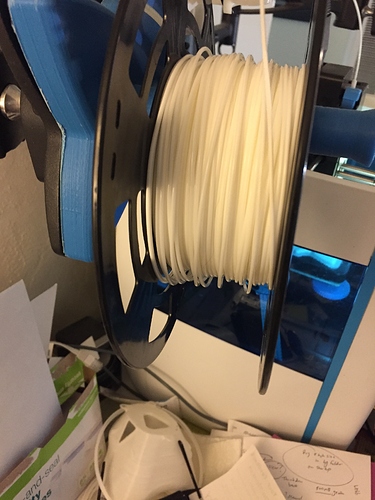 Too bad we don't have an old-school clutch system 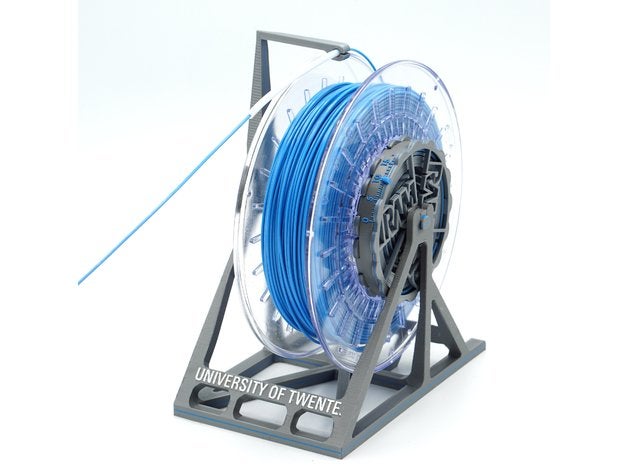 Filament load/unload issues? MMU2 taking too much space? Not with this Universal Auto-Rewind spool holder! It keeps filament on the spool during unloading, up to four full revolutions. Video compilation This is a remake of the Original and Parametric...

it's sooooo fiddly. I've given up on being able to print replacement springs for it.

There's also the gravity style auto rewinder, one with a clutch... 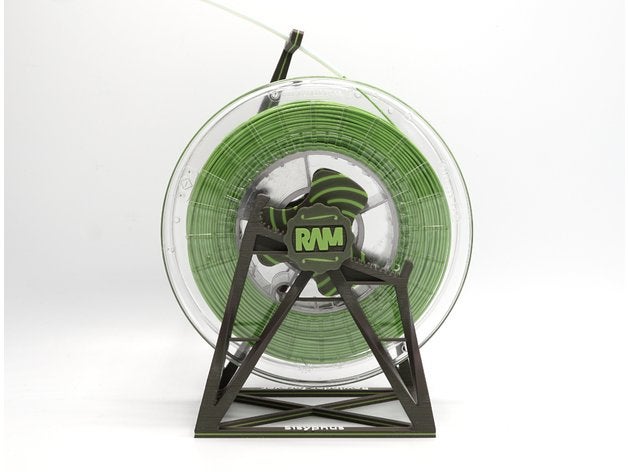 Filament load/unload issues? MMU2 taking too much space? Not with this Sisyphus Auto-Rewind spool holder! It keeps filament on the spool during unloading, up to almost three revolutions. Use two curved nuts to attach the spool to the roller. Put...