Most low power related conversations in this group are blamed upon not using an appropriate power supply or USB cable, which I believe is appropriate. My problem is, I am not sure how to go about purchasing the above items with any certainty of them being suitable and the price charged does not guarantee this. I noticed a suggestion by Charlie that a usb cable heavy enough to carry the current and preferably ferrite beads should be used and I have no idea where to find one of these. Over the years I have collected numerous usb cables some short and fat others long and skinny some with ferrite some without and have discovered that neither attribute will guarantee success.

Would it be possible for for a list of approved power supplies and usb cables could be posted suitable for the average user just running Octopi and a camera? I think this would help to end the multitude of questions regarding power issues.

I try to explain a bit:

This is the power input circuit of a Raspberry Pi 3B+:

As a new device it has a minimum inner resistance of 15 mOhms. With a maximum current of 2.5 A, at this PTC the voltage drop is 37.5 mV.
When the PTC once was tripped it can reach a inner resistance of 100 mOhm. That makes a voltage drop of.250 mV.
So a good power supply should provide 5.2 V. In normal case, these 200 mV more does not harm the Pi, but when the PTC was tripped, these 200 mV come in quite handy.

The schematics of the Pi B3+ is here:
https://www.google.com/url?sa=t&rct=j&q=&esrc=s&source=web&cd=&ved=2ahUKEwiE5qLVhabtAhUSExoKHaPfC0UQFjABegQIBRAC&url=https%3A%2F%2Fwww.raspberrypi.org%2Fdocumentation%2Fhardware%2Fraspberrypi%2Fschematics%2Frpi_SCH_3bplus_1p0_reduced.pdf&usg=AOvVaw0smNA0Qf2kPyoGG-kcG4CI

Thanks but I do understand the problem. I just don't know how to select a suitable power supply and usb cable. I have purchased one from Element along with my rPi 3b+ which has 3A printed on it but it does not work for Octopi. I have few other nondescript ones some of which work for Octopi. I am looking for a model number that I can by with confidence for both a PS unit and also a USB cable.

The official rpi supplies so far have a good track record.

How about USB cables with ferrite beads?

You want the shielded cables for printer communication, I don't think it makes much difference (if any) on the power supply. The official Raspberry Pi ones come with a cable built in.

Sorry Charlie I should have been more specific. I was referring to the communication cable. In another post you had advised using a "good quality usb cable with ferrite beads if possible" and I was wondering if you could recommend somewhere that they are available. Any I have cut open in the past have all been shielded but ones with ferrite beads seem to be few and far between.

Don't tell anyone, but I don't use a ferrite cable myself. It's shielded, but no beads. I did have some that clipped on, and there was one in a drawer that had one. No idea, I've not bought a USB cable in years I have quite a few already.

Don't worry Charlie. Your secret is safe with me. I don't know who I'd tell anyway I'm on self-imposed lockdown here.

I've used these, https://www.amazon.com/gp/product/B008VOPCGY which I found by googling.

Nice, but my CR-10 has a mini USB end however this would work for my Lulzbot mini.

best experience I did with "very normal" China power supplies.
They have screw contacts only. But it's no problem to connect to the USB socket.
Just cut off a USB cable to get one with open end and connect red to 5V+ and black to ground. 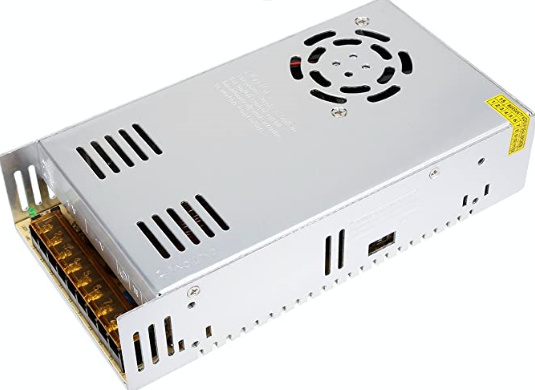 They are available at Amazon, eBay and other market places.

That's pretty op for a pi 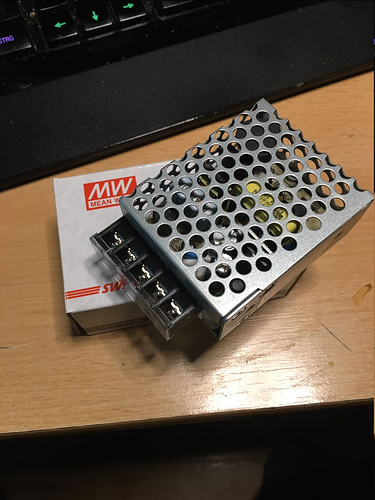 I wasn't aware of that

I like to hide my pi away, same thing with the PS. When the ps is larger than the computer, I may as well use an old laptop

Actually for a while I was using an AT power supply from an old desktop computer to power 3 Octopi setups but my space is limited and the sound of the fan was annoying.

I was getting occasional power warning lightning flashes on one of my machines- and I tried a handful of known good PI PSU's...and still got intermittent issues on this one machine...no reason as far as I could tell - run the same camera, nothing else that could be sucking more current than the others

I have concluded the USB connector on that board has issues and any sort of movement on the connector gives the lightning flash, kind of backing up my theory

So I just bought a batch of the meanwells as they were inexpensive and means I can wire them into the back of the same IEC mains connector, so halves the number of plugs used per printer

At first I used the GPIO ports on the troubled PI to the meanwell PSU, but had the exact same issues
I was confused - till I broke out the multimeter

The cheap thin jumper wires I used (free with an arduino /breadboard kit - so no doubt cheap/fake dupont connector one end) were not capable enough
(adjusted PSU to 5.2v on its terminals - when verifying the voltage at the board - less than 4v)
so I ended up soldering decent gauge wires to the PI on the back - by the USB port and not had issues since...(about 3-4 weeks so far)

Yes, it will make working on the machine that bit harder now the power is hardwired and the PI is less portable, but fingers crossed made it a lot more reliable

I really don't like the orientation of the power port on the 3 series PI's
It does stick out awkwardly so mounting them neatly is not possible- on the earlier models they were inline with the SD card/network and USB rather than on the side and 90 degrees to where other wires were routed...so (headless) installations were much neater and I don't recall ever having USB port issues on those

Not used the other meanwells on the other 2 printers yet or on any of the other PI's scattered about the place, will do it on an "as needed basis" - or next time I have reason to get into the wiring on them

As of last year, the 'Amazon Basics' cables were good. Don't know about since then. To be safe, get a power supply rated at 3 amps@5vdc minimum.
Anker makes good cables capable of carrying 3 amps.
If the USB cable is thin, pass it by.
Shielding necessity is more or less unproven for the RPi world, but they can't hurt as long as they are rated at the 3amps. Or higher, of course.
The USB A and B specs only call for 0.5amps at 5vdc and many, many of the cheap USB cables only work at 0.5amps. So it is up to the customer to verify which one he is getting.

Shielding necessity is more or less unproven for the RPi world

Especially since the actual board itself isn't shielded unless put it into a metal enclosure... And only then if the metal enclosure is tied to the same ground that the connector shields are connected to...

You say 'it's up to the customer to verify which one he is getting". Please explain how the customer can verify this? I have a handful of usb cables collected over the years, Some are fat, some are skinny. As far as I know they all seem to work ok for me. None of the ones I am using get warm which would be an indication of high resistance, either fat or skinny. I assume that the fatter ones are shielded but the only way to know for sure would be to cut them open to see.