I am a relatively new user of octoprint and am unsure about the function of a couple things on the control panel.

I also use repetier host for printing from my daily driver and need to understand the difference in a couple controls before I mess up a print.

On repetier host there is a control labeled flow control that adds a multiplier to all movements, X,Y,Z, & E, so for example I want to speed up or slow down the print one setting handles all movement commands and adjusts speed by percentages.

On octoprint I see 2 similar controls, one labeled "Feed Rate Modifier" and one labeled "Flow Rate Modifier". Logic tells me it likely that one is for travel/print movement and one is for extruder movement but I do not understand which is which nor how they might interact.
Feed Rate --> XYZ ?
Flow Rate --> E ?
Are they independent or interrelated?
Independent implies that changing feed without also changing flow would damage print quality.
Interrelated implies changing one would also make a corresponding change in the other.

Experimenting with those on a large print seems a bad idea though I would like to gradually work the prints speed up to find out the maximum mm/s movement rate that will give good quality prints. Having 2 controls tells me I would probably need to adjust both the same amount for printing.

Can someone please give me the cliff notes version of what each of these 2 settings do and how to use them without destroying a print already in progress.

These options may actually be Marlin specific, I can't find them on the RepRap wiki.

Feed rate is similar to what you described the 'flow control' on Repetier host. On Marlin (via M220):

Set speed percentage factor, aka “Feed Rate” which applies to all G-code-based moves in all (X, Y, Z, and E) axes.

If you wanted to speed the entire print up without altering the extrusion rate, you could increase this value

Flow Rate is similar, except only for the extruder. Marlin M221:

Set the flow percentage, which applies to all E moves added to the planner.

You would increase or decrease this to keep printing the same speed, but at a different extrusion rate.

It's probably worth noting, if your printer is running Marlin and has an LCD, the feedrate is shown, that's the >> 100%. Older versions of Marlin had fr 100% instead: 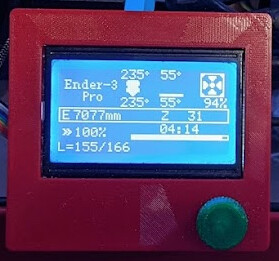 You can change it with the LCD by spinning the encoder while on the status screen.

Flow rate is not displayed as far as I know.

Thanks for the info.

The LCD with repetier firmware also shows the % as Mul: 100 on the status screen and allows me to set feed rate and flow rate within the on-screen settings so I assume they are likely the same settings.

I was not sure what each of those did so appreciate the update. Won't use the Flow Rate much if at all, but it seems the Feed Rate will do what I am used to with the Repetier Host print control. I note that I named it wrong from Repetier Host, I should have said "feedrate" not flow rate.