Abort Print using Google Home with MQTT (or any other way?)

I want to set up my smart home to abort print on the 3D printer if something goes wrong and use my Google home to do so.

I'm thinking of using an MQTT - i can send one using IFTTT through adafruit, but i don't know what MQTT command i can send to the octoprint server (to which topic and what command) to make it abort print.

I'm using Version 1.4.0. Don't have a bundle yet. i might upgrade soon but i'm worried of breaking changes i need to back up first. i will do it later.

You'd probably be better off with direct API calls, the IFTTT plugin, or possibly my MQTT Subscribe plugin (which is just a proxy to the API).

I used the MQTT subscriber and now it works. Thanks.

Out of curiosity - does the IFTTT plugin also receives API calls , now just send them?

Yeah, after looking at the plugin it seems it is only one way, going outbound to IFTTT.

I've set up the MQTT subscript , with what i hope are the right setting. 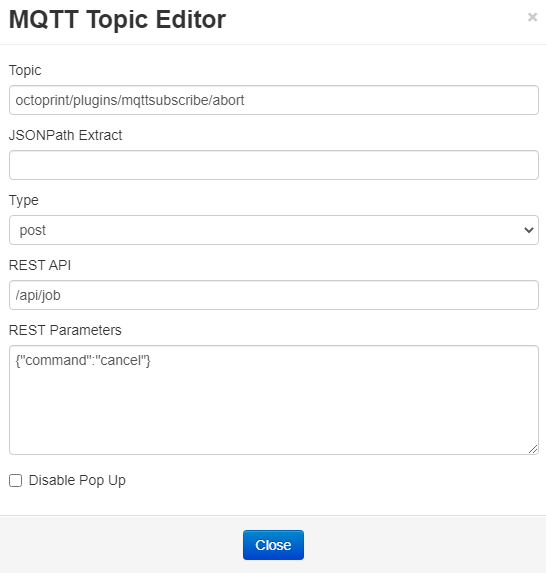 i send the MQTT command.

I see it being received on the main window, and i tested it and it looked like it worked when i did.
then a week passed i started printing again and as the filemant broke i wanted to stop it, it shows the message but didn't abort the print... 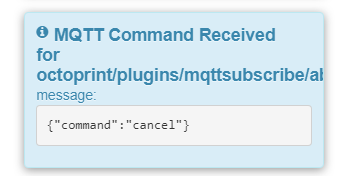 The rest parameters need whitespace inside the curly brackets. Try changing that to.