could these “stickers” be stackable or disappear after xx time 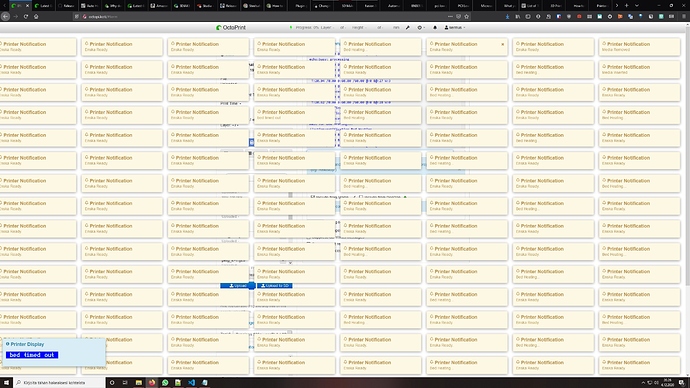 You can turn off popups, in the 'Printer Notifications'/'Action Command Notification' plugin settings:

It is currently not possible to change settings to make them dismiss, but we might be able to look at that in the future.

Also you should look into your firmware, your printer should not generate these many notifications in the first place, and the fact that it does indicates a firmware bug or misconfiguration.

now you missed the point of this problem.
yes i can turn notifications off, yes i can edit firmware and remove Action Command from it.

but why couldn't the plugin stack "stickers" or destroy them according to time or amount e.g. last xx sticker is displayed

Well, they could, but they aren't. So we are providing temporary fixes, until a solution in the code can be found to stack/make them disappear. No guarantees, but also it is not usually an issue (my printer only sends one of these notifications, so this problem is not widespread.)

but why couldn't the plugin stack "stickers" or destroy them according to time or amount e.g. last xx sticker is displayed

You missed the point

It would never need to do that and actually should never do that if the action notification support wasn't being abused by the firmware here to spam the host with notifications that add absolutely no value for the user. The whole idea behind this feature was to alert the user to rare situations that require their attention. Yet for some reason now there is apparently firmware out there that instead almost uses this as a debugging interface. That's not what the plugin was meant to support. The notifications don't vanish because they are meant to be seen, they might contain important information, if they just aged out or went into overflow or something, important notifications would no longer be seen on machines where the firmware doesn't abuse this mechanism to spam people.

I'm telling you that the problem here is with how the feature is being used, or rather abused, by the firmware. And since I can't prevent this from happening, now I once again will get to spend time and energy on implementing a workaround to keep this from causing problems for the users, but for now I suggest you disable popups and investigate why the heck your firmware is so overlay communicative in the first place (it also unnecessarily hogs bandwidth on the serial interface and causes parsing overhead in OctoPrint).