Hello,
I ask for help.
I'm sorry I'm new.
i have an anycubic Predator printer connected to raspberry PI 4 Model B 4GB.
I have connection problems, once connected after a short time it freezes and disconnects.
I upload the results logs hope you can help me.
ps. the printer with sd works perfectly.
Thanks in advance 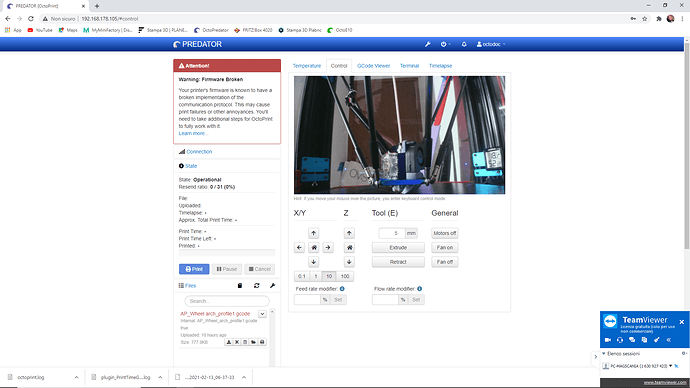 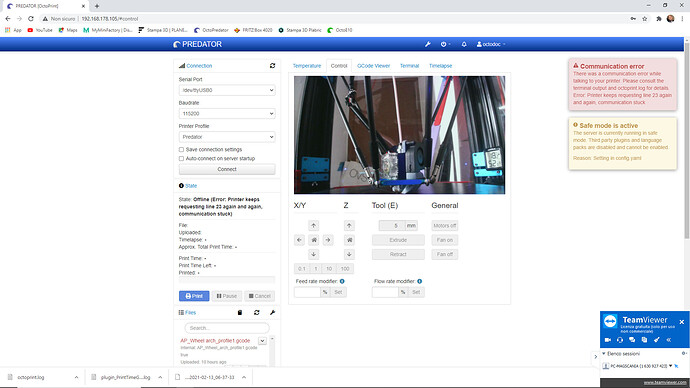 Let's start with the easiest thing - did you try other usb cables?

Did the other cable work a bit better?
An error at line 23 is pretty early so I guess there is a bigger problem.

If it was as bad as the other cable there could be something nearby that emits emi like a microwave, a refrigerator or a fluorescent light.

right next to the predator I have the anet E 10 and it works perfectly.
if you see from the photos I have attached there is a window that tells me "firmware broken" ... what can it be?

all the cables i tried work with the anet perfectly but give this problem with the predator ...

if you see from the photos I have attached there is a window that tells me "firmware broken" ... what can it be?

OctoPrint tells me that my printer's firmware lacks mandatory safety features, what does this mean? FAQ

If OctoPrint 1.3.7 or later is showing you this message in your sidebar [image] it means that it detected a firmware running on your printer that is known to lack mandatory safety features such as thermal runaway protection. It currently does this for the following firmwares: Anet A8 stock firmware (identified through firmware name ANET_A8_*) Anycubic MEGA stock firmware, hardware versions 1 and 2 (prior to January 2018) (identified through Author: (Jolly, xxxxxxxx.CO.) in startup messages…

Some users reported that the display cable was causing similar problems.

Could be worth a try

Good morning...
I formatted and restored the rasberry from scratch by adding some plugins needed to make the printer turn on ... doing some printing tests at the moment the problem no longer arises ... it makes me think that one or more plugins installed previously created me the problem ... as soon as I can I try to reinstall them in order to understand which plugin gave me the problem and if I find it I publish it so as to understand how to fix the error ...
I think the problem is partially solved ..

this morning I performed a print with gcode sliced ​​with simplify3d of 4h and I had no problem .....
now I loaded a gcode sliced ​​with "cura" and the problem recurs ... I blamed some plugins but I think it's something in the gcode created by "cura" .. can you help me?

Which version of cura are you using?

that's good. an older version of cura had a bug which caused stuttering and other problems.
Maybe cura uses higher speed settings than simplify3d?

I'm a bit out of ideas here sorry.
I would still try it with a better cable - even if your other cables work with the anet.
Some mainboards or more sensitive when it comes to emi than others.

I'm using a cable with two ferrite beads for my printer.

problem solved .... I'm a little ashamed of how trivial it is ... it was a comma "," instead of a period "." in the initial setting of the gcode that I had entered or and the Z-OFFSET ....
THANKS FOR YOUR ASSISTANCE IN MESSAGES ..