What is the problem?
I had correctly edited the /boot/octopi-wpa-supplicant.txt with the pi nano editor, so I was absolutely sure there was no strange character, good country too, good SSID and PSK.

Since it wasn't able to be overwriten, I edited the latter and that did the trick for me to have working wifi connection

I couldn't get anylogs because I'm only working on the Pi once it's started and without GUI, but the boot logs displayed showed no errors and even said that the network was reached ( when it wasn't, logs attached )

All of that was on a Pi2B+ board ( which runs perfectly fine since I got it , it's just this wifi network change that was strange)

And final additional info I originally tried to edit the .txt file but it was in READ-ONLY and I chmoded to 777 permission, that might have something to do with the problem ( I did in sudo so I don't know about groups)

Anyway, I only posted this here in case anyone wasn't stumbling upon some strange good /boot/octopi-wpa-supplicant.txt editing but still no wifi. It may be because your file isn't copied.

Good luck to you ! 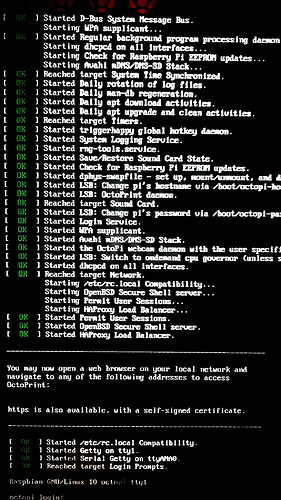 Since it wasn't able to be overwriten, I edited the latter and that did the trick for me to have working wifi connection

To be clear, that's my trick for making it work, but that's no definitive solution