As in I can put a file there, but the server can't see it. Perhaps it in my attempts
to setup two named venv's on a rock64 v2 running armbian, so the real question is how
does octoprint determine where to look for its upload directory? Is it absolute, or relative
to $BASEDIR? I am depending on the venv's $BASEDIR to keep the 2nd session from stepping on the 1st sessions toes.

Any help will be monetarily appreciated.

Since this is a post asking for help, I've moved it to the 'Get Help' category.

Inside OctoPrint's 'basedir' (which is not the same as it's venv - venv is install location), there is an uploads folder. The default location for the basedir if not specified via the --basedir flag would be ~/.octoprint, then uploads would be in there. When you run OctoPrint for the first time the correct directory structure is created.

Manually adding files to the uploads folder is not a fully supported method of adding files - files should be manually added to the watched folder, so that all the relevant systems are notified of the file appearing. This is especially important for plugins that process file uploads, as well as starting the gcode analysis that OctoPrint performs. Adding files to the watched folder should automatically refresh the list, whereas you would have to do so manually in the UI if you added a file to uploads yourself.

That I don't recall, gave me that choice in the first run. And the settings menu does not either.

What I've done is created a prusamk3s subdir. Then as root updatedb, then "locate" that name
just in order to find it! Then I found it was hidden behind the dotted .octoprint directory, which cura cannot see past.

That then requires a user session of mc to move it from local storage here to the rock64 running octoprint in an armbian aarch64 install. Do able but a pita. $BASEDIR is specified in the /etc/default/octoprint file but is not exported, so I exported it, but it made no difference. A file moved
to the subdir IS SEEN under that name in octoprint, but files placed directly in the uploads dir are not.

Anyway, thanks for the explanation, but what I really need is how to move that uploads tree out from behind that #$&@ dot.

You can configure the individual folders in the settings menu, if you just wanted to change the uploads folder (my screenshot is from Windows): 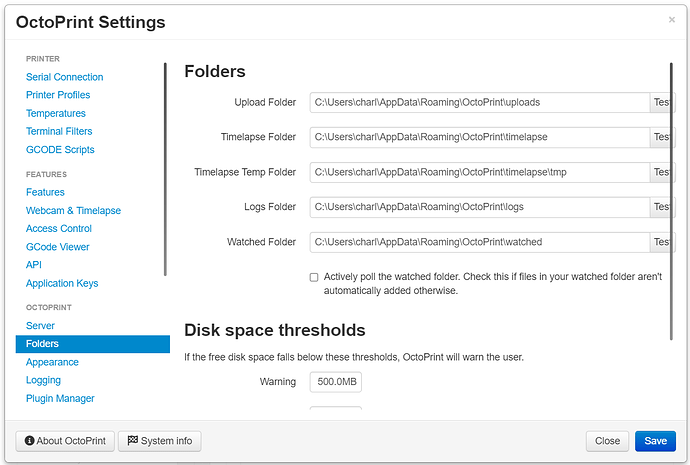 It shouldn't be any network-type storage (since this could be unreliable to stream a gcode file to the printer) and it must be available whenever OctoPrint starts up or it will reset to the default value again.

yes, I found that finally. and that gives me the tools to have multiple sessions of octoprint running, with complete isolation between them I believe. first move the uploads and watched folders to unique places so each instance will see only the files sent to THAT printer. Ditch the direct execution in favor of called a script in each named venv that first does a ". bin/activate", then launches its own copy of bin/octoprint serve, using its own config.yaml. That idea, suitably fine tuned, should keep multiple sessions of octoprint from stepping on each others toes.

Thanks for making an old man think.

because I'm getting an error 98 trying to start the 2nd instance, I've written a couple scripts
that first, blow the old tree away, then recreate it to do the installation in two separate named venv's. The first one, once configured, is working fine and is currently making 39 cable clips that fit the usual 20x20 frame rail of most printers. Started with 40 but knocked one loose, fingerprint on the bed I suspect and I didn't give it an alky wipe beforehand.

I have two Octoprint-name files setup in /etc/default, one for each instance. But I think the venv's
are not working as intended.

That, and it turns out that the ender5plus is an odd bird indeed, as its x home switch is at the right, plus end of its travel, and to get the bed leveler sampling locations centered on the build plate, I hd to put the prox switch on the right side of the nozzle, whereas the original BLTouch
was on the left. So I'm considering turning the x bar around and extending the cable to its home switch to the other end of the bar so it can home at the zero X point instead of assuming x home is 377mm or so. The current home, with the switch activation moved to assure prox switch
clearance to the right hand Z guide rods, means it hits the left physical limits at +26mm. And cura parks it at 0.00 when done. That might be fixable in cura's exit stanza, but I've not yet looked.
Anyway, that's where I am ATM.

Your site as asking for a pix, but I've not a real recent one. The WOW in the handle is because
I have been accused of Walking On Water by people who have no concept of the universes physics. To give you an idea, my mother was the only girl in the 1929 class on Aviation Technology at Des Moines Tech High School. And the first question I asked her that she did not have an answer for, at my age of 6, was "what is gravity?", she didn't know the answer but did know where the library was,so at 6 yo, in addition to McGuffy's, I was also reading a high school physics textbook. 82 years later we have characterized it to around 40 decimal points, but we
still don't even know its propagation velocity since we still can't modify it so we can measure
the time lag. And C speed is slow enough that orbital mechanics as we use it, says the earth
should have spiraled into the star we call the Sun, about 4 billion years ago. I quite school and went to work fixing the then new-fangled things called tv,s in 1949 at 15 years old. I passed the 1st phone test in '62 w/o cracking a book, and passed the CET test in 72 by walking in the door with twenty bucks to take the test. I spent the last 18.75 years of my working life keeping the local cbs tv affiliate on the air., about 50% of the time alone. But now I've reached that age where I don't recall what, if anything, I had for breakfast. I've put rings on 3 women, and outlived them, so I'm alone till whenever the pacemaker battery dies.

and htop says its running from the prusamk3s venv. Having been started by a modified script in /etc/init.d.

I'll no doubt have another question re the error 98 later.
Thanks Charlie. Take care & stay well.

Well, this thing is being recalcitrant enough I'm looking for a different way to do this. First, even with individual venv's, I couldn't keep it from stepping on its own toes. So I went to town and obtained another monitor, and setup a 2nd rock64 to run octoprint it its own private playpen, and thats working at one print attempt per reboot. Its a situation I'd like to fix, but its simply does
not see any gcode filed placed in its watched or uploads directory unless you specifically chmod the gcode file to 755 perms. To me, that is a bug, it should see any file with read perms from the logged in owner.

How far into the future will it be before it just works?

Thanks for the link, paukstelis, I'll study up on it to see if I left anything out.
Take care & stay well.