Hi everyone, i fiished my octoprint setup, everything works well apart from "upload to SD card" and also print from. When i drag and drop my files it says "sd card not initialized" even if i did it (sd card icon > initialize). M21 command doesn't seem to output any error, M20 shows the files on my printer.

My CR10 V2 is running the stock firmware, might be the problem ? Thanks !

Not much errors when pressing initialize, doesn't seem to do much

I can see my files stored on my printer's SD card

Have you enabled SD-Card support in the OctoPrint settings? 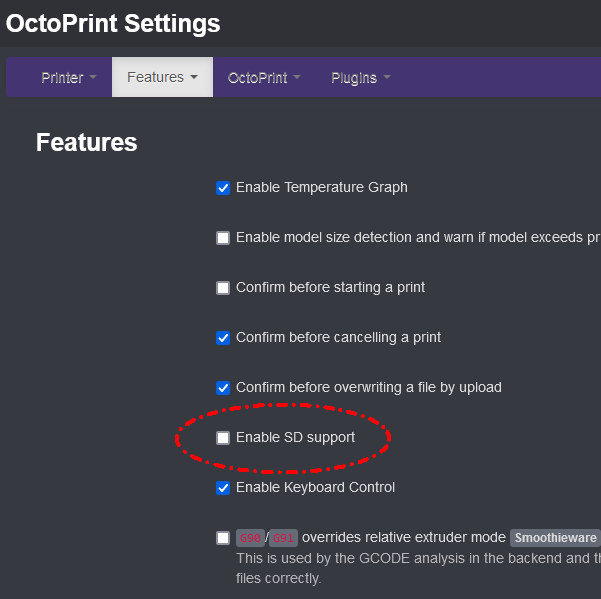 Hi, yes it's enabled. And yup i'm aware i'll not be able to control everything but that's not a problem at all, start a print, monitor the print and cancel + shutdown. That's all i need

. I just want something reliable so SD card seems to be the best option

This doesn't say SD card ok as OctoPrint is expecting. I think I have seen a single file plugin that will rewrite TF => SD around on the forums, I will have a search. If not, I will create one

That didn't take long - here it is:

Since OctoPrint 1.5.0 you can also install single file plugins (.py) via the plugin manager, even from an URL. I just threw your plugin into a gist at Anyone who needs it should be able to install it by entering https://gist.github.com/foosel/9ca02e8a3ea0cb748f4b220981eab12d/raw/convert_TF_SD.py into the plugin manager's "from URL" field in the "Get more..." dialog: [image]

Heyyy you rock, so it was this plugin ! I posted reddit and FB posts asking if it might be the TF and not SD card pb on the firmware, but when i looked at the "affected printers" the CR10 wasn't listed.

Will try that whenever i can, thanks a lot !

I wont be able to test that today unfortunately, now when the printer is connected to Octoprint i get a maxtemp error, i'll tell you when i've fixed that issue. I guess firmware update is absolutely necessary, gotta find which one to get !

Fingers crossed i can check your fix tomorrow afternoon, pretty sure it'll work