I am wondering if this is a bug. On my Ender3 printer I often manually adjust the feedrate to 200 using the dial on the printer, however in Octoprint this change is never updated or reflected and it remains at 100% even though it is actually at 200%. Along these lines, if the feeding rate is 200% on my printer physically, shouldn't the flow rate also be 200%, and shouldn't this also show up in the octoprint GUI?

If this is not a bug, how could this his functionality feasibly be added from a development standpoint? 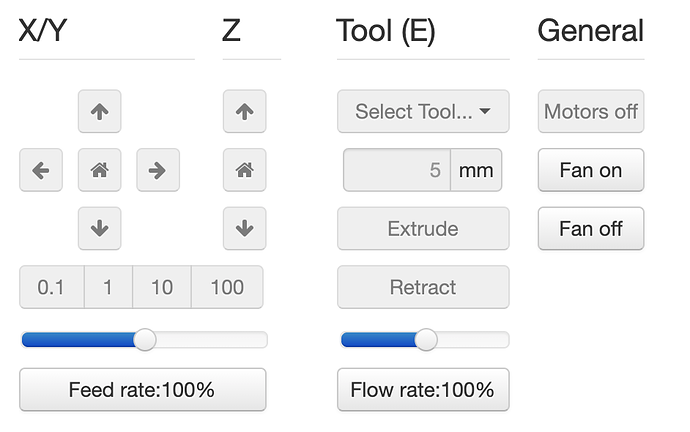 how could this his functionality feasibly be added from a development standpoint?

It can’t, because there is no (gcode-)command to query the feedrate setting from the printer.

Marlin seems to report feedrate (if compiled in):

Back up current feedrate

And this is the output on my printer:

Yes, but not every firmware implementation has it enabled.

It could be checked on startup or an option in the printer configuration. Would be really nice to have it.

For not everyone is in use of this, it may be a plugin project

So it should be usable on most of the printers out there.

At least we should change the comment on the UI, as it has proven wrong:

Feedrate reporting was added in Marlin 2.0.5, without a way to check if it is there or not (other than just trying); there is no "firmware capability" that reports if this feature is available. OctoPrint would have to "poll" periodically to see if the feedrate has changed, on the off-chance that the user has changed the feedrate on the printer LCD. This would lead to communication overhead that may not be worth the hassle.

The check for the feature could be done on connection.

We prefer autoreporting stuff, some people already have stuttering and bandwidth issues so we don't want to make things worse. The obvious comment in the UI also made people go and contribute the missing features, so autoreporting fan speed I know is definitely a (disabled by default) option.

There's nothing stopping you from writing a plugin to do this

- the documentation is quite solid and there's a strong community of plugin authors to help you out (especially on Discord) in case you get stuck.