What is the problem?
GCode Viewer shows wrong model size

What did you already try to solve it?
Not sure what to try. Does not affect the actual print. Just a cosmetic display issue.

I just got OctoPrint setup with my Prusa i3 Mk3. I uploaded a test print directly from Slic3r PE. I noticed that when I go to GCode Viewer it shows "Model size: 142.53mm × 125.54mm × 10.00mm" My test model is a simple block that is only 30mm x 30mm x 10mm. I sent the print form OctoPrint to my printer and it printed in the correct dimensions so this looks more of just a cosmetic issue in the GCode Viewer.

I did the same process with another model and the GCode Viewer showed the wrong model size on that one also.

The model size is the bounding box of any extrusion that takes place. So if your file includes stuff like a nozzle priming routine (as is the case for the default slicing profiles for the MK3) that will factor in. As will a skirt that you have it print around the model.

That doesn't explain my situation. I have been getting the 'model doesn't fit on build plate' warning several times for models that fit or are even very small. Today I noticed that for one g-code file I just uploaded the model info in the g-code viewer says 227.19mm X 147.71mm X 29.40 but in Slic3r it says 200.02 x 75.07 x 29.50 ! So the skirt is not 72mm larger that the model! Attaching a screenshot, you can clearly see that the G-Code viewer shows the skirt and complete bottom layer is less than 8 1cm squares. 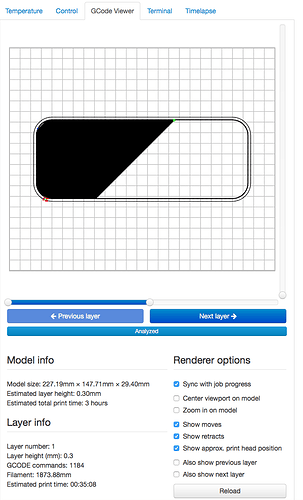 Do either your slicing settings (or your startup gcode) throw in a priming line? Or are you using something like OctoLapse which might move the assembly out of the way?

And it's like this in Safe Mode as well?

Beats me ... I didn't even know there is a 'safe mode' ... Just asking questions here. Trying to figure out why I get these model won't fit warnings for so many models that do fit.

Try it in Safe Mode (see the pull-down menu at the top). If it works then it's one of your plugins that's "adding value" in such a way that it's confused.

If it still isn't happy then toggle off this Beta feature:

If it still isn't happy then toggle off this Beta feature:

And then share a file with which you can reproduce it plus your printer profile settings so I can check why it's detecting it as too big. Might be a bug, might be a GCODE peculiarity that has to be considered.

No, the priming line does NOT fit in the normal build plate bounding box even though it prints on the plate.. It is printed at Y-3. By default OctoPrint's view of the build plate doesn't know negative offsets. You need to tell OctoPrint about that.

I was having the same problem, but I found that I had the origin for the printer bed set incorrectly. now my prints are showing on the bed and not off in space to the top right.