What is the problem? its probably 2 or 3 minutes behind actual progress. been working fine (maybe a second or 2 of lag before now). just noticed a major lag tonight.

What did you already try to solve it? restarted everything... not sure what else to try
I am on 1.4, could be related, as the issue coincides with that change I think...

I have a print running now, I can try safemode after, though Im not too crazy with my plugins. not sure if any are even running...

How do I attach a log file? I have the file, but its too big to paste here

you could zip it

sorry, didnt see the upload option, found it.
here is the last print log. note it ended in a thermal runaway error, but that was just because the silicone sock fell off somehow, not related to the issue.
octoprint.log (119.1 KB) 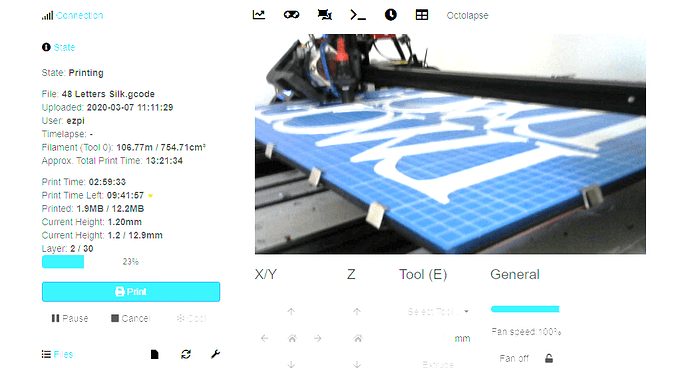 photos added to hopefully demonstrate it, you can see the gcode is still showing the tail end of the 2nd layer, while its actually already into the 3rd layer printing the bottom left E.

I've got this happening also. Started when I upgraded to 1.4.0. By the 3rd layer it's almost a whole layer behind. Tried increasing the size the file in the settings to 30mb, and I only have it using: Sync with job progress, Center viewport on model, Show moves, Show retracts, Show approx. print head position. Everything else is not checked. That appeared to be the minimum amount of information to be able to see what was actually happening. Before the upgrade it kept up, afterwards it no longer did. Running on a Pi 3B (not plus) with a touch screen attached, but screen is in blank mode most of the time, and am using a hard wired connection to my network, so WiFi Lag should not be an issue. Not seeing any errors in any of the logs for octoprint (looked directly at them via PuTTY SSH and tailed them while running a print. Average CPU load while printing is under 1, so not overloaded either.

There's another thread where a work-around was provided.