Totally new to Pi and networking. This is what I would like to do if possible. I have my PC with large display setup in one room and 4 3D printers that will each have a Pi4 connected to them located in an adjacent room along with the internet modem/router.
From my PC I would like to send down the file to print to which ever Pi/Printer I select. I am thinking that perhaps another PC located in the printer room which would allow me to talk to the selected Pi in case I need to.
What would I need in the way of hardware? 4 ea Pi4 and a Hub?Switch all connected with CAT cable.
How would I select a printer/Pi from the PC?
Sure could use some help!
Thank you - Alan

I would go with a 8 port gbit switch (so you have a few spare ports for future devices).
As switch I would recommend something like this 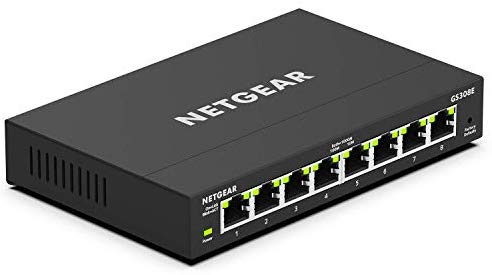 You reach each Pi with its ip or with its hostname (which you have to assign yourself - they all will be named octopi by default).
Also you could manage them all at once with this new interface:

Hi all, New here but been using Octoprint for an age now. Love it, so big thanks to everyone whose put some work in. Over the past 8 or 9 months I've been working on an interface to unify Octoprint instances into 1 interface which I've called OctoFarm. It started from a user called Quilford on github, and his PrinterView. I've since completely re-wrote the thing in an attempt to learn more about javascript and api's. There's a Youtube preview here: Can be downloaded from here: Screen…

You won't need another pc in your printer room - you could just use one of your pi 4s as a desktop. But I would recommend to use at least a 2GB model.

Thank you for the quick reply and information! I happened to have picked up the exact hub you recommended just the other day. I knew I needed one.
You made mention of using one of my Pi4 as a desktop. I assume I will need a touch screen display for that one?
The Pi4s I have are all 4GB models.
Looks like OctoFarm could be the ticket!
Regards

You can use any HDMI or DVI capable display out there. You just need a micro HDMI to HDMI/DVI cable or adaptor.
Then any USB mouse and keyboard (even a wireless set if you wish) and you're done

I went to the OctoFarm site and also the Git looking for general information.
Does each Pi get OctoFarm or just my main PC?
Alan

Told ya I know very little about all this

but thanks to you I now have some direction. Still a great deal to learn.
Thanks Again!

Thank you VERY MUCH!

@PrintedWeezl thanks for the recommendation!

Just to add Alan, I'm the dev of OctoFarm. You don't need a web server to run Octofarm. The releases pages will always contain a master.zip file. If you download that and unzip it you can run Octofarm from your local PC just by opening the index.html file. Alot of my users liked that simplified way of running it so I've kept it for now before I do the Windows packages.

Hope you get some use out of the system.

You don't need a web server to run Octofarm.

Oh I missed that part. Well it doesn't hurt to have it on a webserver and it could potential be easier for mobile devices

I've enhanced it somewhat with a fake database for web servers too. You can put your export into the root and it will read it on all devices accessing. Limits the editing of your printers to that file but makes it easier on accessing.

Just released version 1.0.2 with some bug fixes and enhancements too

Not complicated.
Use Wifi so you don't need cables and switches. Each will have a different IP and you can also give them each a different host name. Have 4 browser tabs open for the 4 octoprint servers.

So he should refund the switch he already bought and not use octofarm to manage them all at once?
That's an odd advice

Also it is my opinion that 4 instances with 4 possible high bandwidth mjpg streams would perform much better on ethernet.

The OP didn't ask for the most expensive solution to the problem. He stated he wanted to be able to upload files to any of his 4 raspberry Pi4's from a single computer. He never mentioned anything about timelapse being enabled and running on all 4 at once etc.
Instead of spending money vicariously through the OP, my suggestion is not complex, and costs no additional money.

How would I select a printer/Pi from the PC?

From one of four bookmarks you store in the browser on your PC: hans, chewbacca, luke, leia.

Plug the TP-Link into the UPS as well as the Ethernet switch (if powered). Plug the four KOPPLAs into the UPS. Into each, plug one power adapter for a Pi and one printer (in pairs). Each printer gets topped by a LACK (see the 3D printer mods people are doing). The filament spool holders go above everything.

For bonus points, add lighting on the underside of the LACK tables.

From your control center, you can toggle on/off each printer individually from the KASA or Alexa apps or via an Amazon Echo or even your own code since the API is available. Just make sure to shut down OctoPrint for that instance.

Use sudo raspi-config to issue each a unique hostname.

Oh... and send foosel a million dollars on her patreon page. She's low on coffee.

Thank you everyone for your suggestions. I did leave a few things out that I did not consider as being important for your help however based on the different information I have received from everyone I now have a good amount of data to work with. Very much appreciated!
I will most likely come back soon for help with the software side of things.
Nice of everyone to work with someone who knows very little about this.
Regards - Alan

You may want to check out this video. Chris shows how to control 4 printers from a single PI. He has another video where he controls just 3 but also supports webcams on the 3.

I'd like to add that we don't support more than one printer on a pi.
You can do it but then you're on your own

Starting to get a bit confused here in who is posting!