Yes, it works quite fine.
My T-Rex 3 came with Marlin and I had no issues.

Even for multicolor prints?
Can I ask which slicer you use?

Yes, for multicolor (2 color mode), copy and mirror mode.
I use the PrusaSlicer.

Hmm, I am using a JG Maker Artist D and every time I send my print to octoprint everything seems fine till it comes for the first extruder change and then E1 just stops where it's at, sits there for at least 10 seconds then E2 will start moving into place to start the new color and crash into E1.
Seems like AUTO-PARK does not work when the code is coming from Octoprint Vs. it reading and processing it from the SD card directly.

I am using Idea Maker as the slicer and it does have a option to set Gcode for extruder change but I have no idea what goes in there.

E1 just stops where it's at, sits there for at least 10 seconds then E2 will start moving into place to start the new color and crash into E1.

That sounds no good.
Usually, with a tool change, the first tool goes to the park position and the next comes out of it's corner.

When you are in OctoPrint go to the terminal tab.

Did I understand correctly? On tool change the printer homes on Z?

Well, it moves the Z up and down about 5 or so mm while E1 or E2 are moving to home on the X.
Pretty sure it's a Artist D thing, it has those little purge buckets with the brushes so I think the Z movement is to clear the brush before its starts moving.

On a tool change it's not bad to move the extruders a bit up. That's ok.

You may try this, line by line:

When changing to another tool, the previous tool has to leave the print area.

Sure didn't do that when I was printing directly from Octoprint. About to attempt the print again and see if there is something in the slicer I am missing.

On a side note, I printed the same gcode for the model from the SD card and it worked but was an awful mess, the two colors were misaligned, major under extrusion in places on T1.

How did you setup the printer profile on OctoPrint?

Can you share the file you want to print?
You also may enable the serial.log. This give deep insight what is happening on the connection to the printer.

Octoprint is set with the same basic parameters as I have in the slicer.
I am attaching the gcode file from the Idea Maker slicer that I am trying to get to print.
This file will print properly from the SD card through the firmware of the printer but every time I try and let octoprint print it I get the same result, E1 will lay down its first couple layers and when it gets to the point where it should move out of the way and let E2 lay down its couple of layers, E1 just stops cold where the end if its layer was and sits there and then E2 comes over to start its layer and crashes into E1. At that point I just turn off the printer.
Traffic_Cone_Rings_Orange.gcode (2.9 MB)

Here are my Octoprint settings for the printer I have defined. 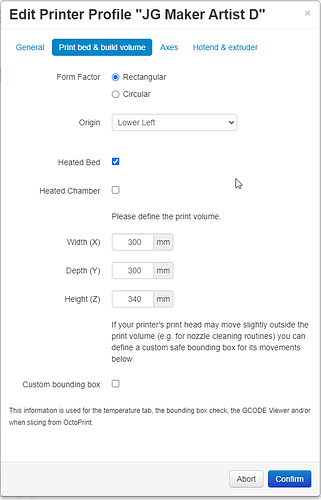 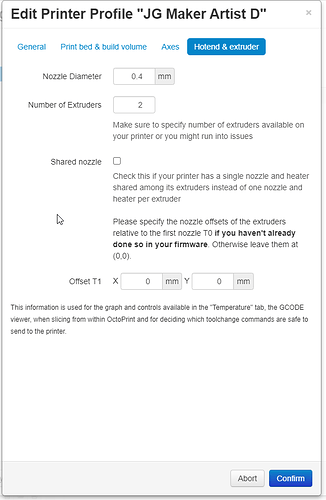 That gcode file make me curious:

There are RepRap firmware commands for pressure advance.
In Marlin this is M900 (linear advance)

is for Raise 3D printers. You can turn that off: Support Center | Raise 3D Technologies Inc

But in all, the gcode file looks ok. The OctoPrint settings also.

I assume a firmware glitch like we have with Creality printers.
You may try with/without SD card in the printers SD card slot.

Yea I have run it with an SD card in the slot and without, no difference, still does the same thing.

Have you tried to enable serial.log and do another print attempt?

I was able to remove the M572 and the M1001 in the slicer settings so that is not included any more.

Finally got access to the FB group for this printer and got some new printer and template profiles and will be doing some more testing later tonight. I will post how it goes.