Apologies on any poor descriptions, I am really new to 3D printing.

OctoPrint seems to be causing random initial layer height and other printing artifacts. See the image below in the next section to see, the print on the left is the one from OctoPrint, both the initial layer and the support structures seem to be printed significantly worse, the actual object seems fine.

Tried looking at the gcode to see if I could find any anomalies between gcode that seemed to print fine and that which didn't (nothing jumped out at me), I tried different slicer settings and manually re-leveling bed (this caused my hot end to push into my print bed and drag around the surface

). The reason I tried re-leveling the bed was because it seemed that the initial starting height was almost doubled. The thing that is really confusing me is that it seems almost random when I get the poor results from OctoPrint.

Finally I took gcode that was consistently printing poorly from OctoPrint and loaded the gcode to the SD card and printed directly from that (with my raspberry pi disconnected from the printer) and it printed perfectly (relative to my results from OctoPrint). So I am at the point where I think it has something to do with OctoPrint, but I am not certain.

In the image below is the EXACT same gcode for both prints, the print on the left was from OctoPrint the one on the right was from the SD card. 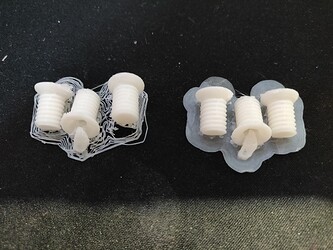 I want to emphasize, depending on the gcode, OctoPrint sometimes gives me comparable results to printing from the SD card. The above image does not represent all my prints from OctoPrint.

Yes, at first this seemed to work, but then eventually (randomly) the started printing strangely again (with the same gcode).

It seems, you have a bit messy USB connection to the printer:

Check for the USB cable: as short and thick as possible with ferrite beads on it.
Also check the cables on your printer:

What is the problem? Lot of messages "Recv:echo:Unknown Command" with UTF-8 chars Overall quality of my print are bad, compared to prints ran from SD Card. One of my print stopped, the printed kept requesting a re-send of a line, communication was stuck. One of my print became crazy, rolled back the extruded at a very high speed, retracting all the filament. The serial.log shows a strange behaviour : printer and Octoprint are sending and receiving at the same time. What did you already try …

Holy cow. After reading that post I jumped and immediately did two things: clip, disconnect and remove altogether from the case the cable for the original touch-display, which I just had cable-manage tied to the casing in the last half of the flooring remove this cable drag chain addon I printed, because I knew it pinches one of the flatband cables to the top steppers & printhead quite hard since that, the printer seems to be working completely fine again. Thank you so much @Ewald_Ikemann ! …

@Ewald_Ikemann Thank you for the suggestions! I will try these out and report back.

@Ewald_Ikemann So far things are looking a lot more consistent, I am going to do a bit more testing and will swing back around after that.