I’m getting the ‘Octoprint server is currently not running l’ message when trying to connect. It was working fine before going to bed, then it was giving me this error when I woke up. The printer was running just fine all night with no glitches.

What did you already try to solve it?
I’ve restarted multiple times.

Logs (syslog, dmesg, ... no logs, no support)
I’ve attempted to get a log, but WinSCP wasn’t connecting either.

use this as an easy script, service octoprint restart, I put those 3 words in a nano file on my home directory. I named mine "opi.sh", so all I have to do is > ./opi.sh and it restarts the service. You can do something like that for any other service you may be having issues with. I built the same type of file for "update" "upgrade" and "autoremove". You will have to chown & chmod all these .sh files.

I hope that's not UberGeek enough to scare you. I'll give you a "guideline" (like pirates) not the step by step. I've read the fine manual, you should too! IMHO not a noob flame!

I think the problem was the newest update. Or possibly the update paired with some plugin. I re loaded from scratch, updated when the update notification popped up, and got the same problem after a couple hours.
I started from scratch again but this time didn’t do the update and it’s been working great since.

Well, it was working fine until I replied. Now it’s back to saying the same thing. 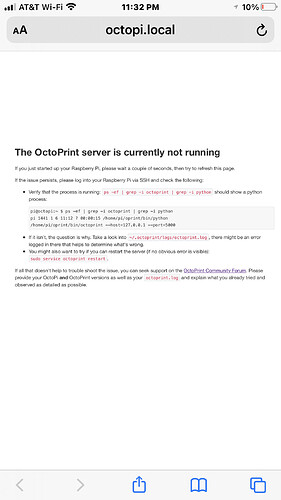 Found the logs finally... it's saying that it's getting SSL CertVerificationError

Found the logs finally... it's saying that it's getting SSL CertVerificationError

There are no errors in the octoprint.log, /var/log/messages or /var/log/syslog that would indicate any problems.

So you don't have the same problem?

Since you got a different issue please open a new thread and attach a systeminfo bundle.

You can't just tell us it doesn't work, there are no errors and don't upload any logs.
What are we supposed to do with that information?