OctoPrint tells me that my printer's firmware lacks mandatory safety features, what does this mean?

Well you monitor the temperature and graph it, so you could have a configurable maximum and configurable action. That could stop the print and turn the heaters off and on machines with power control on the GPIO could switch the power off.

Another possible action would be to reverse the filament out of the extruder.

Well you monitor the temperature and graph it, so you could have a configurable maximum and configurable action.

Temperature control and monitoring of any kind is the responsibility of the firmware, or better yet, hardware safety measures. A serial client is too far away from the action to be able to reliably intervene if things go down the wrong road.

And honestly, I really don't want to build in half measures that people will then use as an excuse to not flash a safe firmware. Next thing is that this will (predictably) fail in a scenario that could have easily be prevented by existing firmware and people blame me for their laziness with regards to securing their printer. No thanks.

Are you still looking for the fabrikator mini response.
I got the old one, made from orange acrylic from hobbyking.
Is that the one you are looking for.

@BigBjoern Right now not the response per se, but rather the information whether that printer is affected or not. I know that what is sold as "Fabrikator Mini II" is actually a Malyan M100 (it reports itself as such), and considering that at least the Malyan M200 and the M150 are known to not have thermal runaway protection I'm very suspicious of Malyan M100 (aka the Fabrikator Mini II, maybe also the first gen Mini, an M115 response would be able to tell) and Malyan M300 (aka the Monoprice Mini Delta). 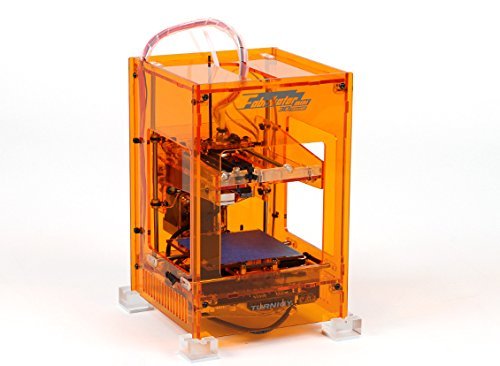 It is no replacement for firmware checks but you cannot rely on firmware for safety. It would need to be written to strict standards and run on multiple redundant systems to be classed as safe. A single fault, such as a shorted MOSFET will cause a fire if the heater is powerful enough and they only way to make it safe is to have a second means of turning it off. Switching the power supply off using an independent computer provides that.

When the firmware outputs the power with the temperatures OctoPrint could also detect thermistor faults. Then you have multiple redundant systems that won't become dangerous due to s single fault.

I arrived at the 9th Feb 2014 date by comparing the archive for the i3 Plus with the Marlin history on GitHub.

I was just wondering, everything I've searched says that octoprint supports Anet a8 stock firmware but I can't find anywhere that it says it supports Merlin, not on the Github, or anywhere else. So does it fully support Merlin?

You are looking for "Marlin", not "Merlin"

And yes, Marlin is supported. OctoPrint wouldn't really work with a lot of printers if it didn't support Marlin.

Thank you and my apologies on the misspelling.

Fair enough, firmware should definitely be the first line of defense. Considering how people are, it is likely that at least a few people would just use the Pi protection as the only safety feature. I would still like it if it were available as a secondary line of defense, but I can respect your reasoning for not adding it.

I appreciate you taking the time to respond, and your hard work on this great software! I hope you have a great day!

I contacted Anycubic support and they told me this (google translated from Chinese):

The customer's question is: Is there a loss of thermistor warning for our MEGA03?
Reply: Yes, no matter which version has such a setting, we have also received feedback from our customers. This warning appears on the screen. The reason for this warning may be that the thermistor wire on the motherboard is not connected properly, the thermistor on the print head or hot bed is loosened, the thermistor is damaged, the heating element is abnormal, and so on.

The printer is an Anycubic Mega i3 with ultrabase. I don't knwo which hardware version. I supposedly instaled the latest firmware they have (v1.1.2), but it still appears as 1.1.0 in the LCD Display.

So not sure if the warning is correct with this printer or not :-?

I applaud this effort! Smart. I've had some close calls where, for instance, the extruder fan knocked itself off, so the ABS solidified in the fin/hot/cool end. I don't quite get the theory around why this happens when it's too hot (I can understand if it's too cold), but I would have thought that too hot would liquify the ABS, but there you go.

I have a Monoprice Mini Select v2 with v40 firmware, and I'm pretty sure that it has thermal runaway protection.

Here was the situation, I changed hot end aluminum blocks and thought that I did a good job of securing the thermistor. I was wrong. For the next print, the thermistor dislodged itself from the block, so of course, it was measuring the ambient temp outside of the block.

My extruder was never going to get to the 240 degC that I'd specified if the measurement was happening outside the block. Eventually, Octoprint detected the error and spit out the following in its logs: Offline (Error: Heating failed, system stopped! Heater_ID: 0.

Looks like it worked to me. The MP Mini Select at least reported the error, and OctoPrint detected it and then shut down the process.

Does this help? I can run a dedicated and more controlled experiment if you want.

@Empyreal - I agree. I have the v40 firmware and was surprised when I was told that it doesn't support this runaway heating. I haven't been able to test it, but the changelog does state that it monitors for it.

In order to adapt the safety check I'll need some way to identify the safe version though. Could all of you people running v40 on an MP Select v2

The would be great!

@foosel I'm running the v40 firmware and just started getting this message when I upgraded Octoprint today. Here's the output you requested: https://pastebin.com/DD4fMs0U


Seems to be a thread that talks about the latest update. It does state that thermal runaway protection has been implemented.
foosel August 6, 2018, 10:29am #38

@fffffgggg54 Thank you too, some source is always good!

Hello,
I am running a Tronxy X1 (I know a very small printer) with Ramps 1.4 and Marlin 1.1.9 enabled.
#define THERMAL_PROTECTION_HOTENDS
(I replaced a Melzi board and Repetier)
Al was running fairly wel, but a few week ago the warning message showed.

What to do ?
efbe

If you know of a printer being sold whose stock firmware doesn't have thermal runaway or other safety features enabled, please help getting it reported here and ideally detected by the plugin. Post a reply and share the printer make and model, firmware link and ideally - if you have access to one - the output of OctoPrint connecting to it, including the M115 request and the printer's response to it.

Also, if you know that a more recent version of the firmware mentioned above has been fixed by the vendor but is still being identified as unsafe by OctoPrint, please provide the necessary data to identify it as well so the plugin can be adjusted accordingly - printer make and model, firmware link and the output of OctoPrint connecting to it, including the M115 request and the printer's response to it.