Pis are really scarce and expensive, especially the 4. so I was looking at alternatives, and I came across a small computer, Libre Computer Board,is it capable of running OctoPi, says it's as capable as a pi, and even though the reviews say it doesn't work, I didn't see anyone using it for OctoPi. Has it been successful for anyone? I have an E3V2 by the way.

Is there alternatives to the raspberry pi? General

The official docs only recommend raspberry pis, unless I missed it. With the global shortage, they seem impossible to get. They are being scalped on eBay for $200. Are there alternatives to the raspberry pi that are tested working fine with octoprint?

The board you mention will probably work with a manual install of OctoPrint (after you install a compatible operating system).

OctoPi is a Raspberry Pi image with OctoPrint pre-installed. This won't work on the board you mentioned.

If you can find an RPi 3B, 3B+, or Zero 2 for a reasonable price, all three will run OctoPi / OctoPrint.

Hi，Try the Orange Pie zero made in China. That's what I use. At present, it can operate stably. And can support WiFi connection

are there Orange Pi Zeros from other countries that cause problems?

Sorry, I use Baidu translation, which may not be accurate for my meaning

Because I'm in China and I use made in China. I use Baidu translation, which may not accurately express my meaning

Because I'm in China and I use made in China.

I'm in England and frequently use 'made in China', as does a much of the world.
I note that on AliExpress these are about half the price that Amazon lists at. Delivery time is the same and overall they look to be a well specified board for the price.
Which OS are you using ??

I have never used the board you mentioned. But I used another solution: a TV box. You can find some TV boxes that can be rooted (foreign trade TV boxes are all rooted), then try to install the armbian system, and finally you can manually install Octoprint. If you are in mainland China, you can contact me dgpower AT qq.com

BTW,The price of the TV box is only less than 1/3 of the Raspberry Pi with the same performance. The only downside is the lack of GPIO 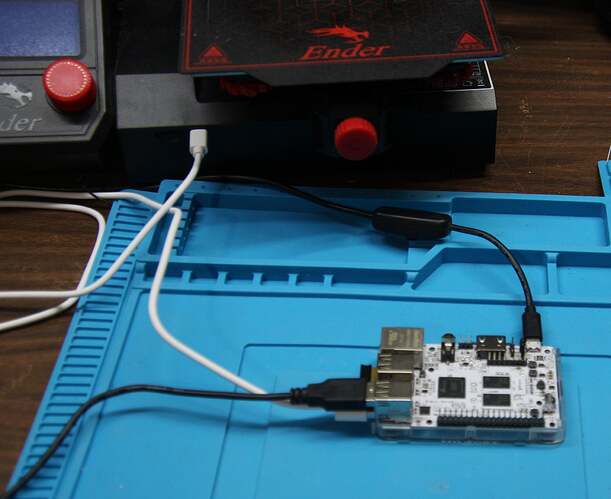 Octolibre - Running Octoprint on the Libre Computer's Le Potato: With the ongoing Raspberry Pi shortage, 3d printing is in need of alternative single board computers that fit in the same space. Libre Computer's "Le Potato" fits in that space, but has...

I have two Opi zero 2 and cant get either to boot in general rather successfully put opi on them. I do have an orange pi 4lts that i was able get to boot but have yet to have any luck with octoprint.

I have just abandoned the idea that using an RPi for OctoPrint is a good thing. Its not the right tool for the job. Additionally, they are now more expensive than a lot of other options that can run Linux with little to no additional effort (I think less). For me the RPi has always presented as finicky and unreliable for an always on appliance. They are really not meant for this. I have found that using a simple off the shelf mini PC for around $110 US has a lot more power and it is stable(Not running from an sd card, does not have power supply issues, Heat issues etc.).

Display options include small HDMI driven touch screens as well as SSH. I can see where some will say what about the IO. You can do most(all) things with MQTT/http and a small inexpensive iot device. Likely you can integrate that with OctoPrint by using on of the many plugins out there.

An other thing to consider is that one can also use a very inexpensive USB camera $10-20 with really good results. I find that by the time you do all the case making and accessory buying needed for a RPi, you spend a lot more than you think just in things. Now consider your time mucking with something that is not reliable.

I am currently running 6 instances with a similar setup. It is very rare that I even think about the compute devices.

The Allwinner H2/3 often killing the sd card.
I would not use one of those boards.