Currently I have an issue trying to setup my Octoprint plugin's environment. I ran and have read through the Octoprint plugin tutorial in Octoprint's master documentation however it seems to be somewhat outdated and it sometimes I get the feeling that a lot of things are left out.

I have, however, figured out a lot by going into other plugin repos and simply digging in. One thing I haven't seen is how I should be setting up my environment so that I'm getting all of the proper intellisense (might not be the right word for it). I was struggling getting the utils for Octoprint to be recognized by Python (everything still works when used though) until I moved the folder from the main repo OctopPrint/src/octoprint into my own directory and voila! I get intellisense for all of the octoprint.whatever imports.

Now I'm trying to get the intellisense for pip packages that I've installed, like python-socketio. I have the package running perfectly but would like the warning Import "socketio" could not be resolved to go away and to get some assumptive typing to come through.

I think this is accomplished by setting your interpreter, but not 100% sure. You want to point it at your OctoPrint's venv. 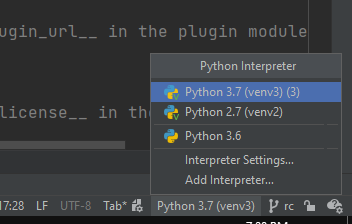 Thank you! I didn't expect this to be more of a python / it's just my environment problem. But I really do appreciate the help and it worked btw!