I am trying to wire a DHT11 temperature/humidity sensor to interface with the enclosure plugin. I am following this walk through https://awesomeopensource.com/project/vitormhenrique/OctoPrint-Enclosure and have run into an issue installing the packages need. This is the terminal inputs which have been used.

All scripts run expect "sudo python setup.py install". At this step I receive this error:

I have tried testing the file path which appears to be valid. I have restarted the process of installing the packages. I have rebooted the system.

The driver that is mantioned in the instructions is deprecated: 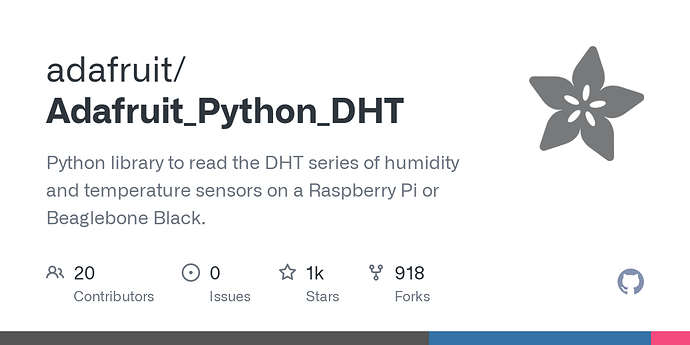 You may use the new one:

In this tutorial we'll be showing how to utilize a DHT sensor Python library based on C for high-speed GPIO polling to handle bit-banged sensor output. Many low cost sensors have unusual output formats, and in this case, a "Manchester-esque" output...

It should be supported by my plugin:

It should be pretty easy to wire up. My plugin should auto detect it.

I followed that tutorial and I am still unable to get values through OctoPrint Enclosure Plugin or terminal. The libraries/packages installed without error. The sensor has a led which is on so the unit is receiving power and ground. In respect to plugin setup, do I specify the physical PIN number or the GPIO PIN number? The plugin dose not specify. I have tried both without success.

Have you tried to run the test ( python3 dht_simpletest.py) that is mentioned in the second half on the site (Python Setup | DHT Humidity Sensing on Raspberry Pi or Beaglebone Black with GDocs Logging | Adafruit Learning System) ?

In the Top Temp plugin, I cannot find an option to accept data from a GPIO pin. Can you point me in that direction?

In top temp, you have to all a python command script to get the values:

Ahh if you were using an DS18B20 it would autodetect them and show under predefined. I will have to try and setup a DHT11 later today. I would highly recommend a DS18B20 - they are a lot more rpi friendly and supported directly in the hardware.

Hi There. I case of a not well working Enclosure Pluginat the moment i found my own solution working with a DHT22 and the TopTemp Plugin. Thank you for this great job .

I just modified AdafruitDHT.py
Edit the following Line:
print('Temp={0:0.1f}* Humidity={1:0.1f}%'.format(temperature, humidity))
to: print ('{0:0.1f}'.format(temperature))
so vou will get a Value only. Working great. You can get the Humidity by doing a renamed copy of AdafruitDHT.py as well with: print ('{0:0.1f}'.format(humidity))
In the Plugin you can call them with:
/home/pi/Adafruit_Python_DHT/examples/AdafruitDHT.py 22 4
eg. /home/pi/Adafruit_Python_DHT/examples/AdafruitDHT**(copy)**.py 22 4
best regards Michel

Just to include, there is a relatively* easy way using "device tree overlays" to include support for both types of sensor at the linux level, which can then be read with cat 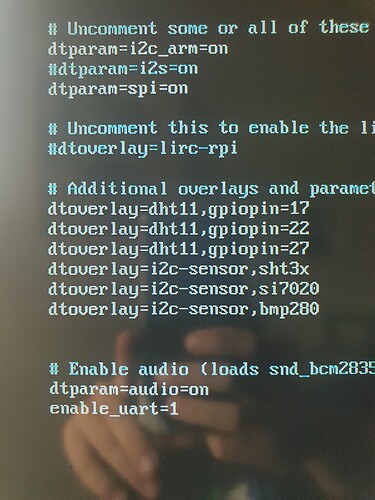 Anyone know of module for SHT3X sensor?

Be keen to have a look, ended up setting up devicetree overlay entries for my other sensors (dht, si7021, bmp280) which then means I can just CAT(read) a file for latest results. That Readme sent me down a dark wonderful path to the murky world of...

I also ran into the Problem with old Libaries, after upgrading to octoPi 1.0.0.0 RC3 and here ist, how I brought my DT22 back to life:
First, I´ve written a dht_v1.py :

Now, you can call this Script in Top Temp as a customer script like this: