Various Issues - All Plugins Broke. OctoPrint enters a 'pause-loop' before print before even telling printer to start heating up

ALL my plugins broke. None of the settings that were last saved are visible in the settings menu. Most of them don't even display settings at all, and 'restore default settings' doesn't work. Majority of the buttons on the various plugins also currently have no effect. This includes attempting to modify the settings for the plugins in the setting menu.

All that said, the plugins themselves appear to be working, but the UI is broken. The enclosure plugin is reacting to button presses and firing outputs based on how it was set up. Arc-Welder is processing the uploaded files, but there is no display that a file is being processed or has completed. The Spaghetti Detective is sending "Print Complete!" emails before the printer even performs a G28, which is a new symptom since these issues started)....

On top of that, octoprint randomly loses communication with the printer. Well, that appears to be the symptom, since it loses control of the printer, despite still retaining a serial connection for things like temperature readings (but not control). When this occurs, i can send commands via terminal to the printer, and the printer responds, but I am unable to print anything at all. The pause/cancel buttons are greyed out. When it does load a file and start to print, it often times enter a 'pause loop', where it will pause the print immediately at the start of the job. Hitting 'resume' will show the print beginning, but it pauses again prior to sending commands to the printer.

I recently turned on the printer-host support in marlin firmware to allow me to use the M600 for filament changes. I'm wondering if this has anything to do with it. Because if the filament change line is triggered, I can now no longer cancel the print from either printer or octoprint without powering down the printer.

Issue is with plugins, so no it did not resolve. 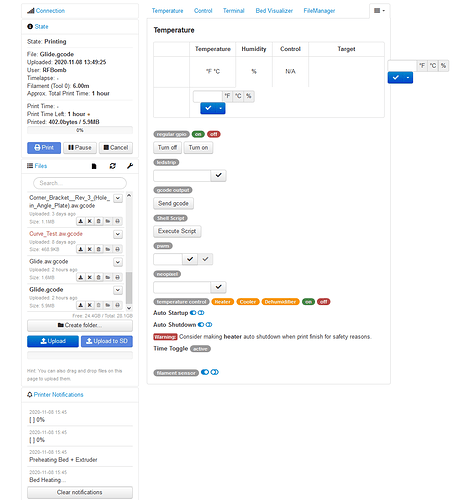 Enclosure_Plugin_Screenshot1033×1137 67 KB
As you can see in this above screenshot, some elements are loaded in, but others are not. But nothing is proper. The temperate reading isn't working, I don't have a PWM or NeoPixel in my config at all, nor an LED Strip. The filament sensor is named 'FilamentDebug1' in my config. But even then, the buttons shown are both options, instead of just the picture that should be shown. (Turn Off and Turn On buttons, where it should be just one or other) 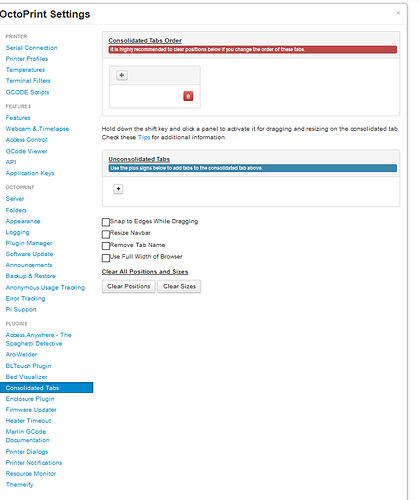 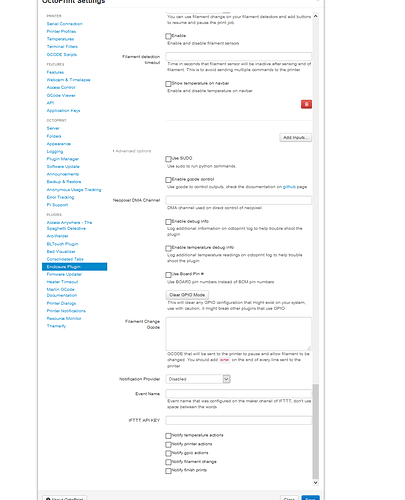 EnclosurePlugin_Missing_Settings963×1188 46.6 KB
There are defaults that would be filled in here, but I also have 'M600' in the filament change section. All of that is missing. 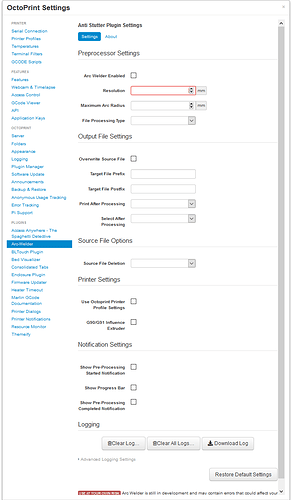 If you are running from an sd card, I would suspect file corruption

All the plugins are now working properly. But i am getting the issue sometimes still.