It would be nice if the admin could have a control to turn the webcam on/off. This would allow control / privacy without having to plug or unplug the webcam from the Pi while still supporting low cost webcams.

Just a simple and intuitive On/Off pair like the Fan buttons in the General section should be easy to implement.

I was thinking it would be nice to have a "Stop Web Streaming" and a "Start MJPG Streamer" in the System Menu. Is that doable @foosel? Or is that something that has to be set up in OctoPi jointly?

More info can be found here on the Webcam setup.

OctoPrint doesn't control the webcam. People might be using an external IP camera, or some other webcam server or whatnot. So adding that stock OctoPrint wouldn't make sense. Shipping a custom config with OctoPi that includes that however would be possible.

I understand that. Shutting down the MJPG Streamer is certainly not as severe as rebooting the whole RasPi. The Script could certainly check to see if others are logged in and using the webcam and give an appropriate warning.

I agree that this could/should be a custom config with OctoPi.
Does OctoPrint installed on a Mac or Windows machine have the "Reboot System" or "Shut Down" menu items or is that specific to the RasPi?

Is this something that could be done thru the "System Command Editor". That plug-in doesn't work on a Mac for some reason. I tried 3 different browsers.

The reboot/shutdown menu items are available (on macOS at least), they're just not preconfigured like on OctoPi. You can set the shell commands for these options manually in the OctoPrint settings under the 'Server' heading.

System Command Editor works for me, Safari 11.1 on 10.12.6 Sierra, albeit with the double scroll bar rendering glitch. Are you using any content blockers or similar?

Like @lbell mentions, if you use system command editor you can set the commands to

Of course webcamd in the commands above have to match the name of the service you add. That name is specific to OctoPi.

Hi, It worked for me adding in the system command editor: 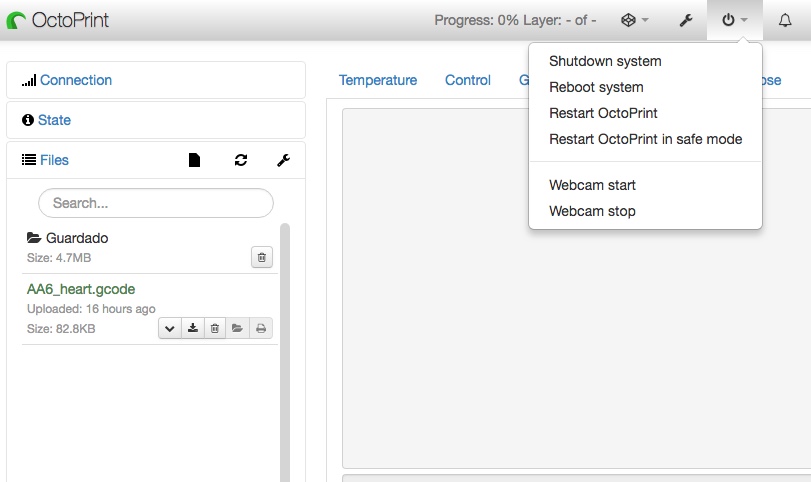 Nube here. I get am error when executing these command after I entered them, because sudo is requesting the root password.

Nube here. I get am error when executing these command after I entered them, because sudo is requesting the root password.

And would this be on an OctoPi-imaged OctoPrint on a Raspberry Pi? If so, then Guy would have taken care of all this since his image rocks.

See lines 134-136 for what he did to allow pi to quietly do things like shutdown, for example.

I started over, re-imaged, updated, and now the control commands are working. Very nice. Thank you!.

Is there any way to trigger system commands on events, like the GCODE Scripts section does? I'd like to make the camera automatically turn on when a print is queued and turn off when it's done.

I realize this is rather old, but anyways I am using the actual Octopi image 1.5.2.
There is no webcamd script in that installation and it seems octopi is doing the webcam stuff by itself.
How would I shutdown the wbcam there and possibly restart it?
Wouldn't it be much better, if Octopy would handle that by itself? Maybe just starting the webcam if someone connects to the webinterface?
What am I missing?
Cheers

I think you might be confused between what OctoPi is and what OctoPrint is - your post contradicts itself.

You can control webcamd using sudo service webcamd {start|stop|restart}. Starting the camera when someone connects could be done with a plugin that ran this command for you, but it is not built in because webcam streaming is not provided by OctoPrint, it is only getting an MJPG stream from the URL and so cannot control it.

I realize the difference between Pi and Print. Nevertheless atleast the Octoprint settings menue has options to controll some things about the webcam. I know it's basically what to do with the stream but what would be the harm in setting those start and stop service commands in that section and running them when necessary?

Anyways thanks to you help, I used the system command plugin to make the corresponding system menue entries and it works - not automatically. At least I now have control over the webcam using Octoprint's system menue.

Thanks again for you help
Cheers

I did this by using GCODE System Commands plugin with two command definitions:

Then inserted these codes to GCODE Scripts:

"After connection to printer is established"
OCTO910

"Before connection to printer is closed"
OCTO911

Anyway, I found this looking for the ability to turn webcam off on Octoprint and wanted to say thank you for all the information. It only takes a few seconds for the service to stop / start now rather than 30 seconds plus, but apart from that all information is still relevant now.
Now to work out how to turn the printer power off at the end of a print