Communication error at the start of a new 3D-print

When I end a 3D-print, the Z-axis is put as high as possible on my printer to prevent the nozzle hitting the printed object when moving the bed in X- and/or Y-position.

As a consequence, when a new print is started the print head/nozzle has to move down all the way again to its home position. For the X- and Y-movements, that goes quick. However, for the Z-movement that takes a while (approx. 15-20 seconds, not timed yet) and because of that long time before the print head/nozzle reaches its home position, OctoPrint is giving me a communication error, abandoning all settings (bed and nozzle heating are switched off) and also disconnects from my printer.
I have to reconnect the printer ASAP and also re-select my object to print ASAP to avoid cooling down too much both the bed as well as the nozzle.

Can this communication error be avoided? Is there some timeout that is set too short and that I can extend to overcome this issue?

You can configure long running commands in the serial connection settings. (Settings > Serial Connection > Firmware and Protocol. Scroll to Protocol Fine Tuning > Advanced then Long Running Commands). G28 should be there by default I think, but if not go ahead and add it. Or maybe your firmware has a different homing command?

OctoPrint is giving me a communication error

I'm having to make assumptions here, since you haven't provided any logs. When you opened the post, there would have been a template that asked you to upload the log. Please do so if this issue is not solved, and in future, always include logs.

@Charlie_Powell
You're absolutely right. I should've added the necessary logs but I simply forgot. My bad and sorry for this.

I've taken the two latest log files from the logs directory, since there was a "roll-over" happening today. I've attached them to this message. octoprint.log is the current log file, octoprint1.log is the previous log file that contains the communication error messages (you'll find more than one).
I had to rename the original file (octoprint.log.2020-11-14) since the "date" extension is not accepted by the file upload process.

In the mean time, I also looked to the settings as per your advice and indeed, G28 is already part of the "Long running commands" as can be seen below:

I think the homing command is correctly generated by Cura (using version 3.4.1, was part of the software that was delivered with the printer). This is the start of the generated G-code:

It uses the Marvin code, which is quite common, I guess (know that I just took my first steps in the world of 3D printing, so lots is new stuff to me...)
As you can see, for both the X/Y as well as the Z displacements the code G28 is used.

Anything more I could do?

I'm going to guess that the move to maximum Z is part of the end gcode in the slicer. If I am correct, then changing that to a switch to relative mode, move Z up 5mm, switch back to absolute mode would clear the object on the bed but put Z a lot closer to where it needs to be on the next print.

Post your end gcode and we can fix it for you. Alternatively, we could move Z closer in the start gcode (or we could do both).

If you want us to take a look at a failure case, then enable the serial.log, do the experiment, and then post the serial.log and we should be able to see exactly where things go wrong.

One last thought (edit)... I believe there is a timeout that could be extended. Not sure which one until I can look as the serial.log of a failure.

I've activated the serial logging right now and once I'm in that situation again, I'll give you all the info you need (full logs of octoprint as well as serial) + also the G-code I've used to start the printing.

Thanks for your support too!

I wanted to add lots of information to this reply, including all the necessary info asked. However, I got this silly message, forcing me to give my information in bits and pieces.

I've had the time again to start printing 3D stuff and I could also reproduce the problem.

Below are screenshots of the printing process:

Then the nozzle is moved in Z- position to its starting point. That takes some 15-20 seconds (maybe a bit more, don't know exactly...). 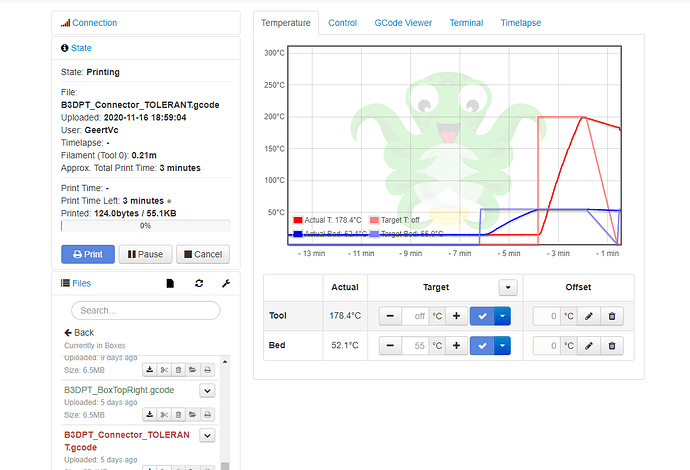 See next reply for the sequel, 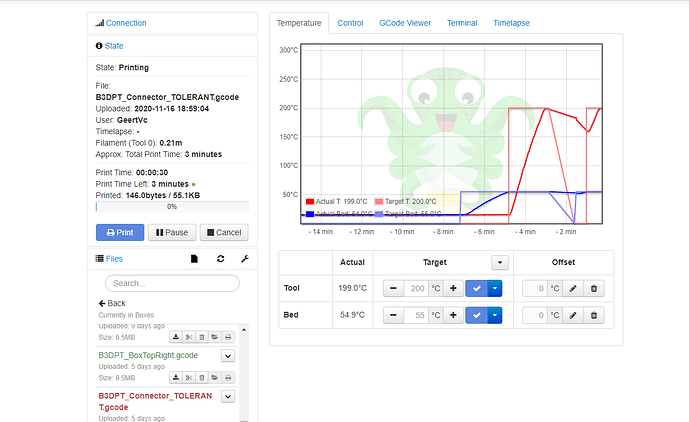 Pls. see next reply for the sequel.

See the next reply for the sequel.

And finally, if it would be of interest, I've also attached the G-code of the object I wanted to print:

I hope all is present to give me some clues as to why this is error is happening.

Before I look at the files I want to say thanks, @GeertVc, for your efforts in delivering the information. If it's any consolation, your post count may now be high enough that you have graduated from new user status

First, in the serial.log the following line appears:

I think we have established that this happens regularly on specific commands so let's do what it says. 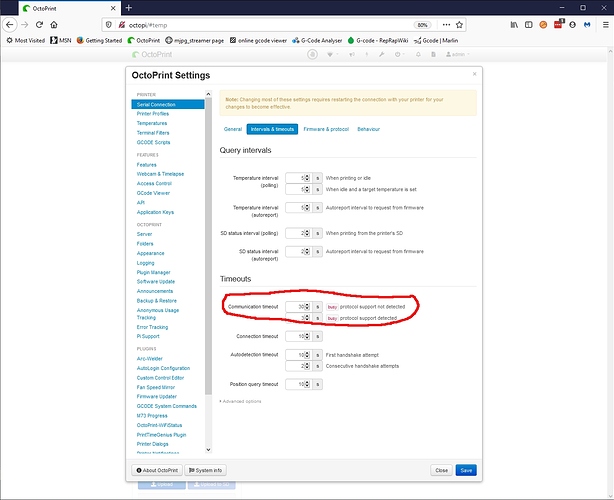 Before we try the experiment again, Your start gcode has the following commands in it:

Remove the F{travel_speed} part (remove the second command completely). The slicer is supposed to replace this with the value of travel_speed. You appear to be using Cura 3.4.1 so the syntax is correct but travel_speed isn't defined. Alternatively, you could substitute 3600 for {travel_speed} as that speed appears within the gcode generated for the actual part.

Either edit the gcode you have already or slice your part again. Send it to OctoPrint and print it. Hopefully, we have fixed the problem but if not, you can examine the serial.log and verify that either the timestamps or the ...after 6... reflects the changes you made. Change the Max. consecutive to 20 if 10 didn't work and try again.

First off, thanks for your extensive explanation and the time you've put in preparing the answer for me. Much appreciated!!!

But no, I'm still not graduated to a higher level. I can still post only one embedded media at a time in a post. So, here we go again with my bits and pieces. Sorry again for that...

Next, if I understand you correctly, for the first section I should execute steps 3 and 4 OR steps 5 and 6. But not both (otherwise, two changes in one go...). Am I correct with my assumption?
If so, then I've executed steps 3 and 4 first. I already found the location for steps 5 and 6 too, but didn't change anything in that section so far. As you mentioned, one step at a time...

About the Long running commands section, I can confirm G28 is already part of the commands list. See image below: 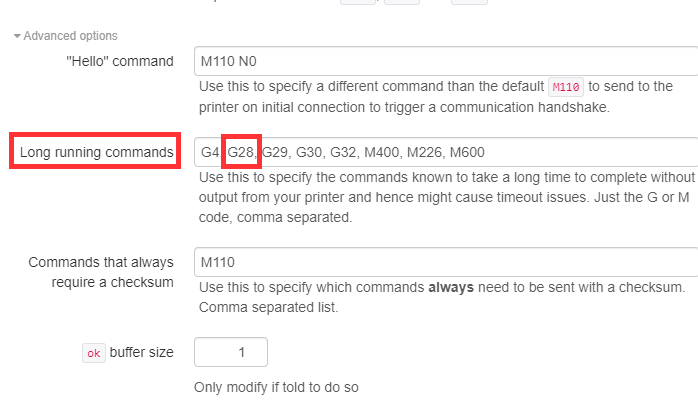 Get to trust level 1 by…

Edit Looks to me like you are pretty close, maybe there is a slightly different threshold from the default

Regarding the start code, pls. see the image below. It shows both start and end code generated by Cura as of this writing: 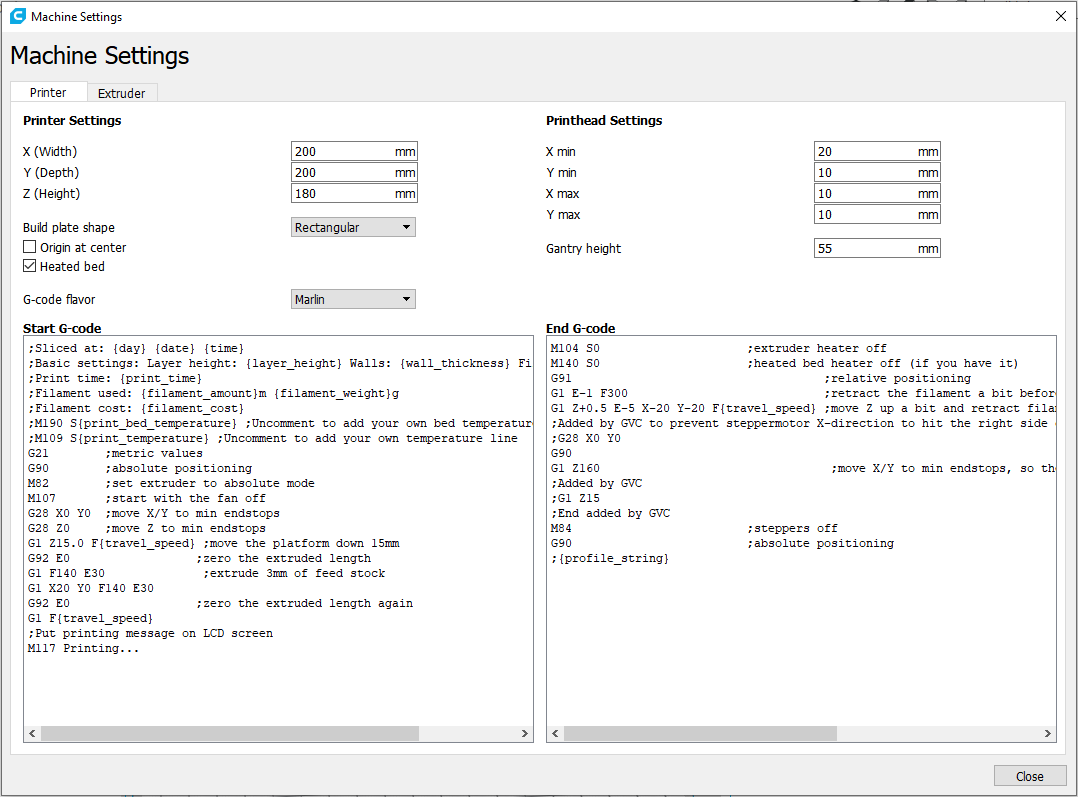 I've also pasted the start and end code below:

I can see the command you mentioned in the start code, but then in one line, not two lines.

Is this similar to what you mentioned (except that it's written in one line iso 2...)?

Next to this, I already had to change the end code too (see the comments with the trigram "GVC") because the motor was hitting the right side each and every time a 3D printing was finished. With that change, it doesn't happen anymore...

This was the code causing the issue (but now commented out):