I am running the newest version of octoprint. I have a qidi X-pro printer which I belive to be causing the problems. I have the raspberry pi connected to the printer via a usb-a to usb-a cable. I also tried using an Ethernet cable from the printer to the pi. Neither are working and the only option I have to connect is AUTO. It would be awesome to get it working via an Ethernet cable but I'm not sure if that is possible. Any help would be appreciated, thanks!

If you find a USB Type-A connector on your printer's controller board, I'm not convinced that this is for serial communication. Perhaps it's for adding a USB thumbdrive. Usually, this would be presented by a USB Type-B connector instead, the more square-ish one.

I also tried using an Ethernet cable from the printer to the pi.

When connecting to computers together via Ethernet (without a hub in between), you'd need an Ethernet crossover cable rather than the standard variety. I occasionally do this for demos and talks so I know that this works.

Pretty sure that you're going to need to find the other sort of connection on your printer's controller board.

Also, please provide a link to the printer; I'm not finding it.

The printer also has wifi functionality, but only through the slicer that came with the printer, I can not send a file from simplify3d to it. Which is why I got the raspberry pi, I am also very interested in the time lapse mode which I cannot get to work properly without being connect to the printer

Wow, that looks a lot like a FlashForge Creator Pro, for what it's worth. It looks like the Q/A section of your linked Amazon page has conflicting ideas about whether or not this will work.

The seller's response indicates that there are two USB ports and one could be used with OctoPrint, they suggest. Okay, so now find that second port that's somewhere else on the printer (the back). It would be close to the power connector, I'd guess.

And yet another review which conflicts with the seller's:

BTW, it does not have a USB printer port, just a USB connection for memory cards. This pretty much makes it necessary to use the Qidi software to send print jobs to the printer over the network - it would be nice if other 3D applications could print directly to the printer but so far I have not found any 3rd party applications that can do it.

Another review suggests that they've provided the Cura software so this probably isn't a FlashForge clone then.

I am not home right now so I am not able to check if there is another USB port right now, but I am wonder if octoprint will connect to the printer over WiFi, becuase the printer connects to WiFi.

The problem is that they've created their own API that they're serving up and it's not a typical Marlin-like serial conversation.

In theory, you could take the virtual driver that's built into OctoPrint and make it so that it sends commands to that API over on the printer and then shuffles the responses back. The problem is that you don't want network-style delays in this conversation. It would suck.

Backing up one step then, it's possible that you could create custom Control buttons that make calls to that API on the printer. At some level, though, you just realize that this is a Fred Flintstone TV set.

Do you have any idea as to how I could teach it to use the printers API or am I alone here?

If there is a Type B style of USB connector, say, on the back of the printer then there's still hope. If there isn't, then I'm doubting that OctoPrint will give you much value for this printer.

Sadly there is not, at least I can still monitor from a webcam.

Look into their API if you can find any information about it. You might be able to control something on the printer as well, as I've indicated.

Anyone tryed the second USB Port on the Mainboard?

That looks promising. You could either chase a female USB Type B connector for those four pins or you could directly wire them over to the Raspi's GPIO pins (disabling Bluetooth and serial-over-console so that the good UART is available) and then this might work. 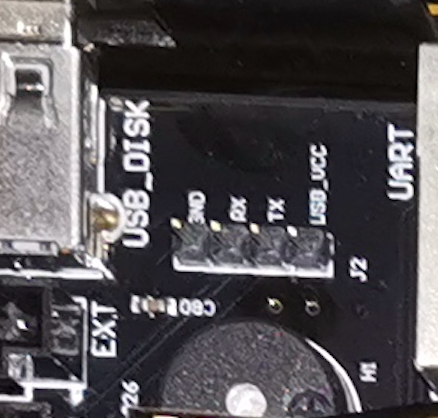 First run...
The female usb (typ A) connector wasn't working...
even Windows told me "the connected USB device is not working"
Not sure yet how to connect the raspberry, found a few things how to disable bt, maybe tomorrow (depends on my Kids...)

Hi guys, I currently have a QIDI Tech X-PRO printer and it works great, however I'm looking to hook it up to octoprint. There is only one major problem, there is no serial port present on the printer, however on the earlier models there was a USB-B port on it and after doing some digging it seems there is a UART header on the control board. I do know that the pi controller has its own UART header and I was wondering if I could just wire the two together or if I could just get a UART to USB cable and connect them that way. I have included a photo of the header. Thanks for any help guys.

[Merged with this thread since it's the same topic.]

Qidi X-Plus on Octoprint
tryed UART, but was not succesfull, 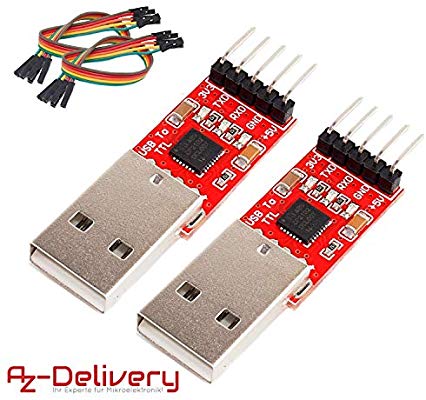 Sweet. That was kind of what I was suggesting but it looks like it requires the TTL converter for some reason. You'd think that you could bitbang this on the Raspberry's GPIO pins but maybe that would have required a logic level converter...

I mounted the Camera Module in the front next to the Touch Display to get better lighting.
Next step... autoleveling theres a free Plug on the Print Head!

Q: when starting a print job from "cold" state (bed or hotend cold) Octoprint seems to ignore the "wait" rec. from the Printer... what am i doing wrong? (of course m109 and m190 in start, but still...)

I'm not sure. I always preheat my printer (so that I can purge any old filament that was in the hotend throat before starting the job).