I screwed up the "octoprint-shutdown" file on my linux mint install, don't have sudo permissions anymore!

I have a desktop running as a octoprint server, with linux mint 19.3 as its main operating system (4790K, 16Gb ram). I was having issues getting the "power" buttons in octoprint to work with linux mint (restart octoprint, reboot system), so I followed the info provided in the link below to get the buttons working. On my system, the file I changed was located in the folder "etc/sudoers.d" and is called "octoprint-shutdown". I kept trying random things that came to mind as I had no idea that if this file were to be viewed by the system as corrupted, then I would no longer have sudo permissions on this machine. I eventually did just that, and now get the error message linked below when I try to do anything on the machine in the terminal that requires sudo privileges. Regretfully, that includes trying to revert the "octoprint-shutdown" back to its original state. Does anyone know what I can do to fix my own stupidity? 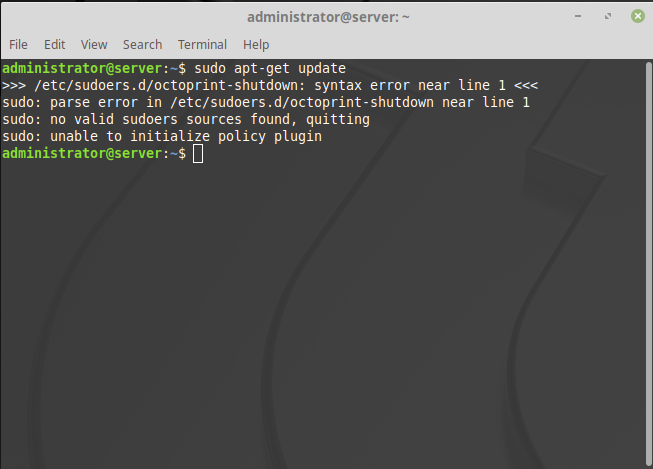 I created a Mint "Live USB" and booted into it (in the hopes of being able to change the file that way), but I didn't have any luck changing the file as it still says I don't have permission (how is that possible that the Mint flash drive knows or even cares that the Mint desktop is broken?).

Thank you for your time, Ben

I kept trying random things that came to mind as I had no idea that if this file were to be viewed by the system as corrupted, then I would no longer have sudo permissions on this machine...

As I would say to my students, "...and what did you learnnnnn?"

God-only knows what goes on under-the-hood in Linux Mint with respect to sudo. You do need to make sure the pi (if that's your user for OctoPrint) is a member of the sudoers group, btw. Here's the closest thing I saw on their forum for managing this.