I have a gCode I wrote for Leveling my printer’s bed, this one in particular is for my JG Maker Artist-D. I have it move the nozzle to the bed leveling location and the I send "M0" to pause while I adjust the bed in at that point. I have used this in the past on Marlin Printers and it always works from SD Card, but I understand sending it to the Printer may prevent OctoPrint from continuing it.

I never used the OctoPrint until recently and OctoPrint Pauses by not sending another command until I click Continue, but it keeps popping up messages every time until my screen is littered with popup messages that I have to close.

No, I did not think Safe Mode was a viable solution to try, but will if you want me to.

No, I did not think Safe Mode was a viable solution to try, but will if you want me to. 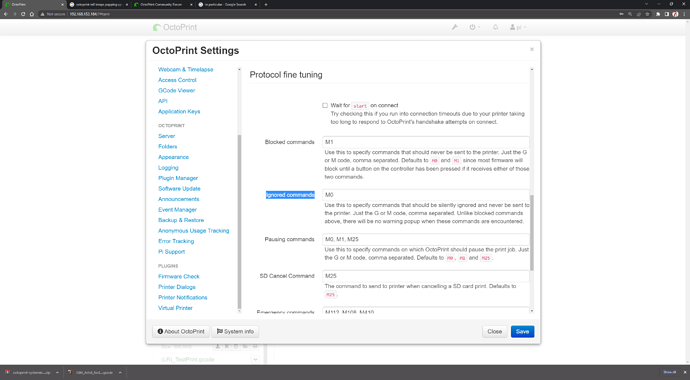 THANK YOU IN ADVANCE!
-Jason

Now it is working right?

Not sure what changed, or if complete reboot is required after changing those settings or not, but that is how it happened. Unless the Matrix petted my Octopus to make it feel loved and happy, :).

Its working now, and I realized that I failed to mention I am using a Raspberry Pi 4. I also have a 3b if testing between the two is ever needed.

It was printing and printing and then when I tried to use it without the popup messages, now, it starts printing files it printed previously, and just stops after a layer or two.

I never heard of anyone who ever recommend it to me ever having these problems.

What am I doing wrong?

I printed this file twice with OctoPrint an d a few other files. Then something was going on with the OctoPrint and then it started printing for the first layer then it would just stop printing?

I uploaded the files to the SDCard on my pc and they print fine.

All of the problems started after I started using the M0 code and I tried to suppress them in settings. Then something broke and now it loses connection, files stop printing without cause, This is odd. My friends have used OctoPrint for years and they never had problems like this. So I am guessing that something with the M0 gCode is not right.

I will give that a try after I re-flash and reconfigure the OctoPrint. I was wondering if there was a way for OctoPrint to pause, I was thinking something like O0, but @pause makes more since as it isolates it as an OctoPrint command.

I just got the printer and have been trying to get it calibrated and understand its TLC required to use it. If just using @pause fixes the problem, then I would be happy to get OctoPrint going again.

So first, Thank you. I was getting frustrated losing hours to chasing a bug, or my novice experience with the OctoPrint.

I wanted to ask you, I have installed a test OctoPrint server on Windows 10. I have a couple of Microsoft Surface Tablets and was just thinking of running an OctoPrint server on them and connect to them localhost style. This way I can just make a local account that does not need a password, and I do not have to connect them to the internet.

It would basically be a dedicated touch tablet Isolated from the world. I can use a hub and direct connect to all of my printers, or have a dedicated tablet.

Have you heard of any issues with using windows 10 for the OctoPrint Server?

Octoprint on Windows 10 seems to run.

Here is a guide:

Setting up OctoPrint on Windows Guides

This guide will help you install OctoPrint onto Windows.

Do you just want to access your existing OctoPrint instance under Windows? Then there's absolutely no need to follow this guide, this is for installing the OctoPrint server under Windows, which is probably a rather unusual setup. If all you want is to access your existing OctoPrint instance (e.g. running on a Raspberry Pi via the OctoPi image), fire up your browser of choice and direct it to that instance's URL. Don't know wh…

It does work, just was want to know if you had any info on stability. I created an up-to-date process using a video guide that did not work about two or three weeks ago.

I just installed it on the Microsoft surface and it is talking to the printer. I will have to wait for the SDCard print to stop before I can start a print form the tablet and give it a go.

file says gcode, but it is text instructions.

Thank you again for your help!

@Ewald_Ikemann I tired your suggestion using @pause and it worked perfectly! Thank you for your time and help again!