I recently installed a fresh install on a rpi 3 b+ and after the initial setup and installing the plugins I like and restarting I am no longer able to access any of the options and it acts as if octoprint and everything is connected which it is not as the printer is off. I have 2 other RPIs with octoprint installed and have no issues what so ever with them. I did notice they are running octoprint 1.4.2 and the one I am having issues with is running 1.3.12

Here is a photo of the RPI having issues with. Notice the top bar is missing some options and that it shows that it is connected to my SM2 which is crazy as its off and unplugged. I also put some kapton tape on the USB to make sure it wasnt getting power from the USB which it is not. I also noticed that on the photo it does not show that python is installed like it does on the working photo in the next post 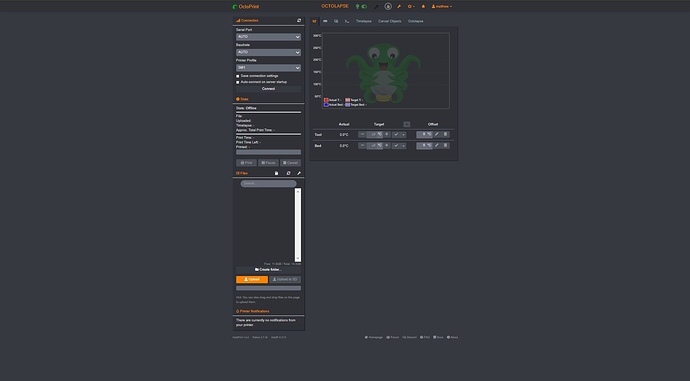 Why did you delete the section asking for logs?

Considering this is more than a year old, update to a newer version before trying to solve problems. If you cannot do this through the web interface, do so via the command line. SSH to the install and run:
~/oprint/bin/pip install octoprint==1.4.2

didn't have logs to provide and that is very funny as this was a fresh download from here OctoPrint.org - Download & Setup OctoPrint as of yesterday and that is what was provided so not sure where I can find the latest version do please share????? I am going to run that command but it is weird that what i downloaded from that website is such an old version

What you downloaded from the website was OctoPi not OctoPrint. There is a new OctoPi release in the works, which will come bundled with the latest release of OctoPrint. OctoPi is just a pre-built image for Raspberry Pi, so it will come with whatever the current software was at the time of build (as it happens, November 2019).

It should prompt you to update when you first set it up, but if not then the command line is the way forward.

didn't have logs to provide

Click the link logs and you will find out how to grab some logs to provide. Something is wrong with the UI - logs would likely tell the story.

The other thing that would tell the story is safe mode. Again, click the link and you will find out how to do this.

More than likely, it is a plugin causing the issues. Since OctoPrint's UI itself will not run without the settings, it is probably just being hidden in the UI.