Ok so the issue I’m having is random layer shifts and pauses mid print after an octoprint update. Everything was fine just prior

I have adjusted my buffer size and I think I’ve got an xon xoff handshake setup in marlin. After this the zits from the random pauses quite but the layer shifts did not.

Not as of yet but is my next task, though I may be more interested in rolling back my octoprint version...

I just updated to the 1.6.0 when it prompted in the web GUI. I’m running marlin 2.x and octoprint is on a pi 3b. My plugins are pretty Goode viewer, bed leveling visualizer, simple emergency stop, and some basic control stuff.

though I may be more interested in rolling back my octoprint version...

Hate the 1.4.2 Want to go back to older Version Get Help

That's the way of the tutorial with the 1.3.12 url This might also work but haven't tested it for downgrading - just for upgrading ~/oprint/bin/pip install --force-reinstall OctoPrint==1.3.12 sudo service octoprint restart I'm not quite sure when this was changed because I'm on developer builds most of the time. I think it came with 1.4.1 so you could also downgrade to 1.4.0. 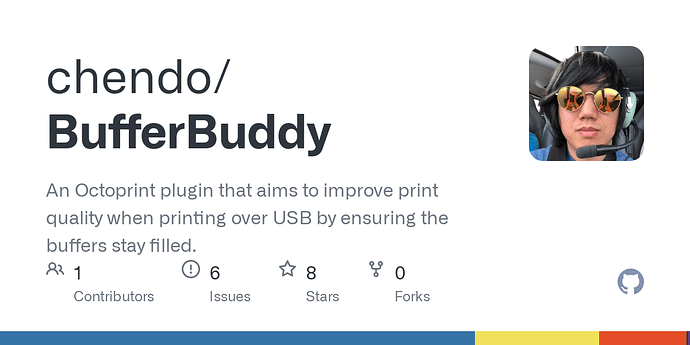 An Octoprint plugin that aims to improve print quality when printing over USB by ensuring the buffers stay filled.

You can download this in OctoPrint's System Information dialog ... no bundle, no support! )

This is always useful