What is a Systeminfo Bundle and how can I obtain one?

Since OctoPrint 1.6.0, you can download a Systeminfo Bundle from the System Information dialog that you'll be asked to provide for support requests and bug reports. 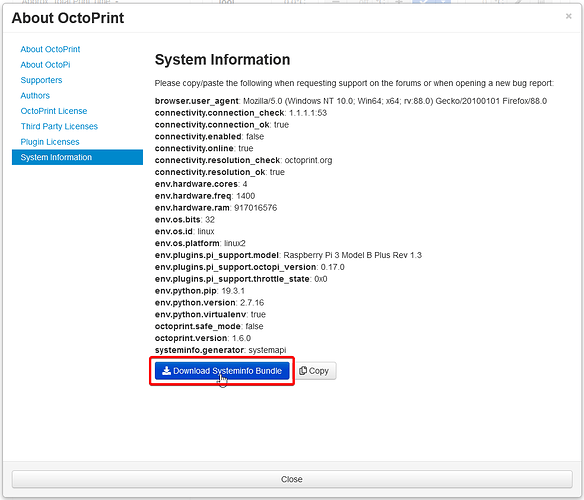 You can upload these bundles on the forums and attach them to GitHub Issues.

You have a number of options to access the System Information dialog and the bundle download link on it:

Please upload it directly to the forum post or the GitHub issue. Do not put it on some cloud host. Do not unpack it. Do not extract parts from it. Share it in full and unmodified.

What's in a Systeminfo Bundle?

How can I view what's in my Systeminfo Bundle?

There's a Systeminfo Bundle viewer available at bundleviewer.octoprint.org. You can upload your bundle there to view it. The app runs only in your browser, your bundle will not be stored anywhere.

I have a problem with a version that doesn't yet support Systeminfo Bundles!

First of all, upgrade to OctoPrint 1.6.0 or later. While there's some support for old versions, it doesn't make much sense trying to debug problems that might already be fixed in newer versions.

If upgrading is not an option for whatever reason, then please make sure to manually provide octoprint.log, serial.log, the contents of your terminal tab, your version of OctoPrint, the operating system & version of operating system that OctoPrint is running under, OctoPi version and Pi model (if running OctoPi and/or on a Pi), information on your environment (what hardware, what printer, what firmware on the printer, ...) -- in short, as much information as possible.

Private username was in one of the files. And IP throughout another ... this should be filtered?

Is that a question or a request?

It should contain only local ip addresses so nothing to worry about.

Depending on the problem, this information will help us to find solutions.

If you're still concerned, feel free to remove those things before submitting the logs.

this is the plugin manager error:
There was an error with the template dialogs/settings.jinja2 at line number 41: Could not build url for endpoint 'plugin.pluginmanager.upload_file'. Did you mean 'api.pluginCommand' instead?

this is the backup / restore error:There was an error with the template dialogs/settings.jinja2 at line number 41: Could not build url for endpoint 'plugin.backup.perform_restore'. Did you mean 'api.performSystemAction' instead?

Not sure what problem you are referring to - did you mean to post somewhere else?

no, it's the same problem as the initial post

The initial post is an FAQ entry about how to obtain a system info bundle.

I broke my Octoprint trying to update to 1.8 Docker

What is the problem? After trying to update my Docker Octoprint to 1.8, certain elements of the interface seems to be broken though the version is still 1.7.3. Please see screenshots. I still can connect to the printer but the plugins are not working correctly. What did you already try to solve it? I tried to reinstall many times. Have you tried running in safe mode? Yes, it works but still with issues. Did running in safe mode solve the problem? No Systeminfo Bundle On safe mode, when…