Nightly builds of Marlin by the Marlin Firmware Service

OctoPrint's bundled FirmwareCheck plugin has been updated to also give you a short heads-up if you are running a nightly build of Marlin as provided by the Marlin Firmware Service. 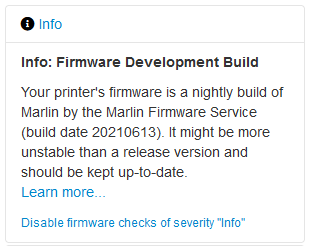 The first thing to check if you encounter what you think is a firmware bug is if you are using the latest nightly firmware. While new features happen fast, so do fixes to address issues encountered along the way.

Marlin Firmware Service aims to keep 14 days of previous builds - so if you just updated and a new problem appears, try rolling back a couple of days and see if the problem continues.

The Marlin developers rely on your reports to address problems quickly and properly - but sometimes it can take a few days to debug, figure out the issue, and the properly resolve it. If this catches you in a bad spot, if you update to the latest build and have issues, go back to the oldest one available in the list. This is less likely to have unaddressed issues.

You can also check the feedback from the community via the voting system of the service. When firmware works, people are unlikely to leave feedback - so most scores are 0. If the score is -1 or -2, maybe one or two people had issues - but this is not always firmware based. If the score is a large negative number, its probably a good idea to skip that build.

If an issue is known, normally a note is placed on the firmware page which details the issue, and where possible, to the bug report where you can check its progress. This will usually include a status, and a known date range where the problem was present.