Greetings! I installed OctoPi on my RPi 4, then changed the wpa supplicant txt file to my wifi settings, but when I plug it in and try to open the web browser, nothing, I made sure the IP was correct by using Advanced IP Scanner, didn't show. I uncommented the 4 hashtags (or pounds if you prefer) btw. I don't know what's wrong, but if I can't get OctoPi set up, I might use it as RetroPie.

What version of OctoPi? How did you image the SD card? If you used the Raspberry Pi Imager, then you can use the gear icon to set the WiFi settings before you write the image onto the SD card.

Can you post (or upload) your /boot/octopi-wpa-supplicant.txt file here? You can obfuscate the psk and ssid carefully and use the </> tool if you post the contents instead of uploading the file.

If you can use an ethernet cable instead the defaults on the RPi should get you up on the network so you can SSH in and troubleshoot the WiFi connection.

One question, is the WPA supplicant file supposed to have a string in the psk?

Do I just copy that into WPA and swap out the ssid and psk?

You can do that or edit the one you have making sure it looks like mine. Note that the "country=US" line is not next to the "## WPA/WPA2 secured section" (but it can be if you want).

Of course, you can edit the file on the RPi using nano, vi, or emacs (which you may have to install).

You can take a look at this thread:

A number of people who have followed the instructions for setting up OctoPi on your Raspberry Pi experience problems getting connected to WiFi. This thread is intended to detail a couple of common problems people have experienced and things to try to resolve them. This page assumes that your WiFi network is up and working and that other devices are able to connect to it without a problem. We are also assuming that you have already successfully downloaded the OctoPi image and "burned" it on to y…

It runs through a lot of the common problems people have in getting their Pi or OctoPi setup onto their WiFi network.

It was written some time ago, but most (all?) of the troubleshooting stuff should still apply.

Ok, I set the wifi country. Now it's visible on Advaced IP but when i enter the ip in edge.

I feel like there is missing something in your last sentence

oh sorry, when I enter the ip in edge, nothing.

Can you share a screenshot of edge when you try? 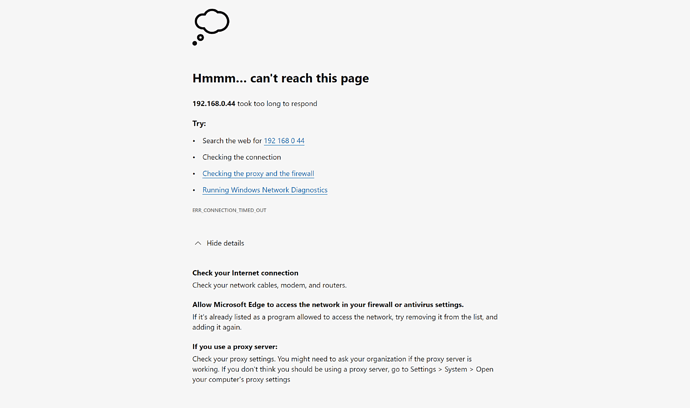 No and no, the https url just says the same, http doesnt add the http, same outcome

Is the rpi 4 compatible with 5G?

@Ewald_Ikemann Ok, I tried enabling "show dead" on Advaced IP, it shows the rpi, but it's dead, at least the scanner says it is, is there a fix?

Ok, I think the reason I see it but can't connect is that it says it's dead, can I fix that?

Ok, this is really annoying. I could see it but not connect, because the password's ending quote had been deleted, must have pressed backspace by accident.