Starting with version 2022.3.1, OctoPrint's bundled Pi Support plugin will warn you if you have not yet changed the password of the Raspberry Pi's default user "pi" and SSH is enabled (which OctoPi ships with by default). 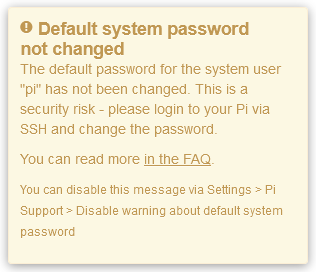 The setup guide originally prompted you to change this password for a reason - it simply is a security risk to leave it at its default, and even if you can fully trust the LAN you are running OctoPrint in, keeping the default password in place could make it easier for malicious plugins to execute things with super-user rights on your Raspberry Pi.

So please change it. But how?

Using an SSH client such as PuTTY or ssh, connect to your Pi. You will be prompted for username and password. Enter "pi" and "raspberry". Then enter passwd and hit Enter. You will be asked to enter a new password twice. Reboot your Pi (sudo reboot) and you should be done.

With keyboard and monitor attached

Connect a keyboard and monitor to your Pi. You might have to reboot the Pi via OctoPrint's system menu for the monitor to be recognized. Then, on the login prompt log in using "pi" and "raspberry" and proceed the same as via SSH.

Shutdown your Pi via OctoPrint's system menu. Take the SD card out, put it in a card reader. Create a file octopi-password.txt on it, containing a new password as its only line. Unmount, plug the card back into the Pi and boot and the new password should be set.

Recommend adding the release number in the opening sentence so it is clear when this feature was added.

Will do, once I know it (the plug-in versions are date based)