There are firmware variants shipped with some Creality printers that produce broken SD card related messages. Instead of SD as defined in the protocol they are referred to as TF, producing unrecognized messages from the printer. If your Creality printer's SD card is being reported as uninitialized by OctoPrint even though it is inserted and you see error free responses to M21 and M20 in the terminal, your printer's firmware might be affected by this bug.

Considering the amount of issues we see with Creality stock firmware, the cleanest solution would be to get rid of said firmware altogether and flash a well supported mainline Marlin or other firmware on your printer. However, if that is not an option, a workaround exists in form of a tiny single file plugin for OctoPrint that rewrites the messages so OctoPrint can understand them. To quote this slightly longer thread:

Anyone who needs [this plugin] should be able to install it by entering https://gist.github.com/foosel/9ca02e8a3ea0cb748f4b220981eab12d/raw/convert_TF_SD.py into the plugin manager's "from URL" field in the "Get more..." dialog [and then clicking install]: 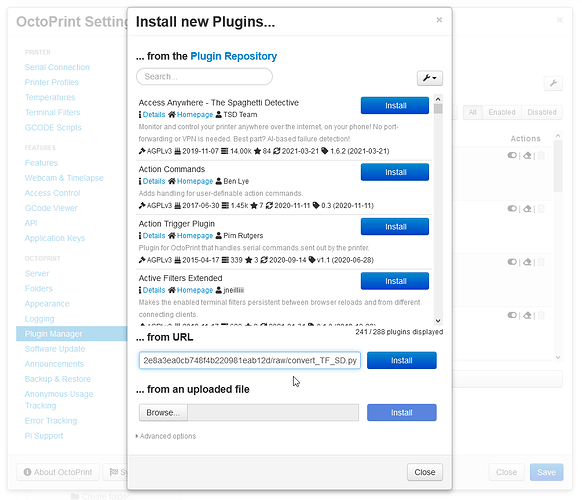 Note that this will only work with OctoPrint versions 1.5.0 or newer. If you don't have that yet, please update first.

If you continue to see the warning by the bundled FirmwareCheck plugin even though you have the plugin installed, make sure you have version 1.0.2 or newer installed. If not, please reinstall to ensure you have an up to date version that fixes this issue.