I would like to suggest an idea for a new plugin.

It is necessary to add the ability to issue notifications when a preset temperature is reached for a hot bed (and for a hot end - completely the same). In order not to get confused while talking about the temperature of the hot bed.
Next to the standard temperature control buttons on the "Control" tab, add one more button: "Signal". The button must have two states: "On" and "Off". The state is switched with a mouse click.

In the plug-in settings, you must also provide for the user to set the temperature corresponding to the temperature of the "off" state. I suppose for her it is advisable to set the default value "30 degrees Celsius". The user can switch the heater to “off”, turn on the “Alarm” - and he will receive a notification about the moment when it will be possible to remove the part from the cooled table.

It was the idea itself, and now thoughts on implementation options:

It seems to me that such a plugin is not very difficult to implement. The interface is simple and intuitive, and the possibilities are very broad. I think the plugin will be popular with users.

You can do this with already existing plugins and tools.

The first option gives you a full automation framework where you can do/program whatever you want. (With a lot of premade integration.)

The second option gives you ready to lunch alerting things with a lot of configuration options, slack, email, pagerduty, wechat, webhook, and pushover integrations, if you need alerting and not automation.

Thanks for your advice!
In my opinion, both of these solutions are too powerful and therefore too complex for those who are sitting next to the printer and just waiting for the hot bed (or extruder) to warm up or cool down.
The idea I proposed has a very simple and user-friendly interface that does not require complex settings and additional software on third-party devices.

You can implement 1 in the custom GCode your slicer adds.

BTW if you want someone to write code for you (for free) it's never a good idea to state how simple the task is.

The slicer contains what you need to print a specific part.
In the Octoprint interface, everything you need to manage your printer. The idea is to add audible alarms to processes controlled from the octoprint interface.
For example, I need to warm up the table for bedleveling. I have set the warm-up in the interface and I want to hear a signal when the warm-up is over. But I don't have to do this every time I print a part. 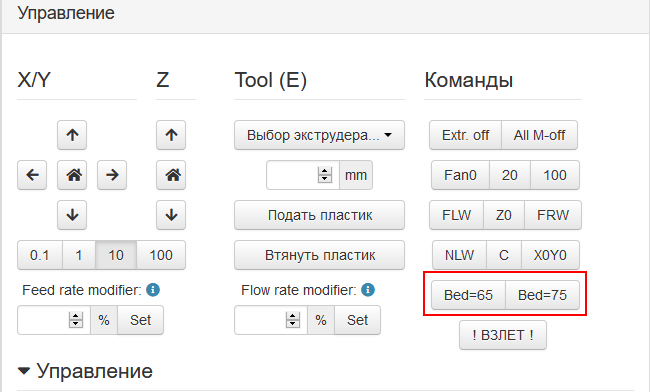 I give an idea to someone who is interested in writing a plugin that I think will be useful FOR MANY. And maybe get some kind of support from users...

It is not hard to write a plugin

Good idea, I would know exactly how to do it but I don't have time

My LED plugin WS281x LED Status already hooks into the temperatures received hook, to track heating (& maybe in future cooling) progress for display on the lights.

Honestly, the let's-set-the-hotend-temperature gcode command is a blocking command. If the next command is M117 I am so ready, combined with one of the nifty M117-related plugins then you're all set.

or an M300 command and one of those plugins also...

You could do this without modifying the control.jinja2 file by using custom controls in your config.yaml.

I posted an example related to flow/feed rate the other day and one of them had multiple command examples.

You can achieve the old feed and flow rate sliders using custom controls in config.yaml. It will not replace the newer OctoPrint input fields, but gives you the previous slider interface. By no means is this "real-time"; changes from the LCD panel will not be reflected in the web interface, and that was the main reason it was changed in OctoPrint. If you want that to happen, post feature requests in the respective firmware repositories to report these changes from the LCD to connected hosts. F…

[jneilliii], Thank you very much, I know about this opportunity.
It is unwise to use an additional slider to set the temperature of the sound signal; this value is already set in the standard interface under the temperature graph.

It is convenient to use "Custom Controls"; when using them, you do not need to re-make changes in "control.jinja2" when changing a octoprint release.
But I consider the functionality of CustomControls insufficient.
It has two major drawbacks:

This is partly why I so much welcome your excellent "Consolidated Tabs" plugin - it makes the "Terminal" tab easily accessible, where your other plugin ("Terminal commands extended") will display additional buttons with their richest functionality.

And, just in case, I will once again explain the essence of the idea: when using the Octoprint interface (at this moment we are working with the printer interactively!) We start a rather lengthy process, the duration of which is unknown in advance. It is convenient to receive a notification that the process is complete. But this notification is NOT ALWAYS required. Therefore, the control element for enabling / disabling the notification mode must be located somewhere near the control elements of the process itself.

This is partly why I so much welcome your excellent "Consolidated Tabs" plugin - it makes the "Terminal" tab easily accessible, where your other plugin ("Terminal commands extended") will display additional buttons with their richest functionality.

Thanks, I'm glad you enjoy my work.