Python version mismatches in plugins and how to solve them

Starting with OctoPrint 1.7.0, OctoPrint will show you more clearly when there's been an error while installing an OctoPrint plugin due to a Python version mismatch: 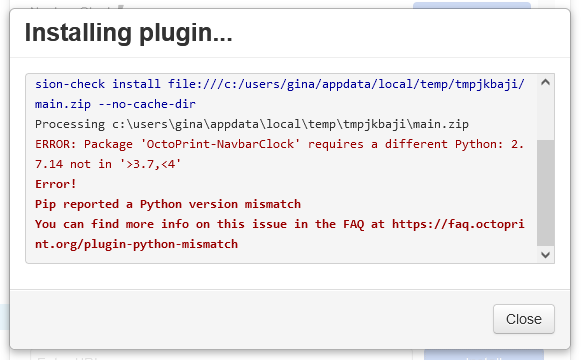 A lot of OctoPrint instances out there are still running under Python 2 even though that has been end of life now since January 2020. Most of the plugins out there have now been made compatible to both Python 2 and 3. And more and more plugins are now switching to Python 3 only, prompting these kinds of messages.

In order to be able to install a Python 3 only plugin, you'll need to upgrade your OctoPrint instance to Python 3. There's an FAQ entry that tells you how to do that:

If you are still running Python 2 and using OctoPrint 1.7.0 or later, you will start to see warnings like this: [image] You need to upgrade your OctoPrint install to use Python 3, as Python 2 is end-of-life and a future OctoPrint version will no longer support running using Python 2. In addition, there's 25 plugins that already don't support Python 2 and more will follow, that you won't be able to take advantage of. You should upgrade as soon as possible. How can I upgrade? The process is sl…

If you already are on Python 3 but get this message, you need to pay close attention to the Python version required by the plugin and make sure to have OctoPrint running under this. If it's a Python 2 only plugin however, it might be a better idea to ask the author if they plan to support Python 3 in the future and if not, find another plugin that does.