UI is showing garbage in all tabs 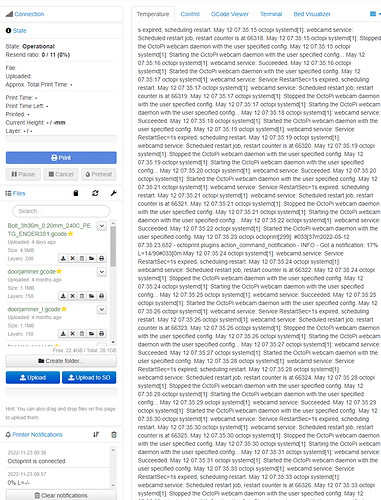 I've recently been getting this in my UI after the most recent update. I've tried to clear the cookies and cache but that didn't seem to help. Each tab has the same issue, filled with rubbish.

Has anyone else seen this and found a solution?

I'm quite impressed that your server still works at all, but it looks like you've got some kind of corruption going on there.

To fix OctoPrint, you could try reinstalling the update:

How to reinstall OctoPrint FAQ

Note: This process will not impact any saved data or plugin installs, so it is harmless to give it a try if recommended. There are some occasions where you want to reinstall OctoPrint - like if OctoPrint doesn't start anymore after a failed update or if you can't update OctoPrint to a newer version because something went wrong during the update. Sometimes it also helps in situations where the filesystem was damaged (for example after a pulled plug, a power outage, a crash an…

However, I would take it as a sign that your SD card may be dying. Keep regular backups to avoid data loss, and maybe look at swapping it for a different one.