Haven't found the process to update Octoprint outside of the User Interface in the Python3 environment.

went through FAQ
Searched the questions.

Do you get any error messages?

It will surely have told you that your pip version is too old. To solve this, SSH into your OctoPi, then run

and then restart OctoPrint. Then in the Software Update setting, click on Advanced Options and hit "Force refresh": 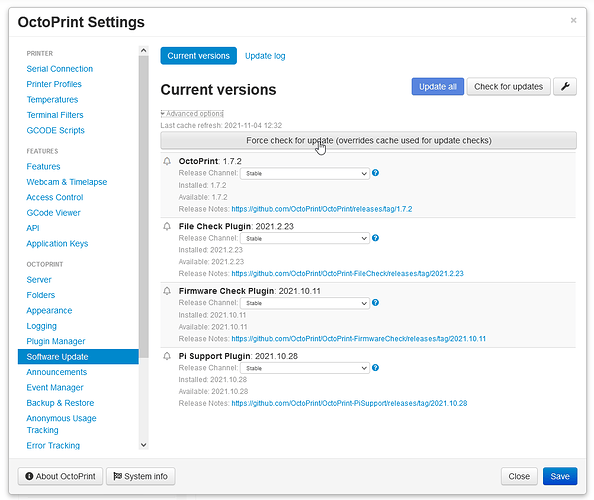 This is also covered in the FAQ:

OctoPrint tells me it can't run an update due to my Python environment being outdated, what do I do now? FAQ

Starting with version 1.3.10, OctoPrint's built-in update mechanism will no longer allow to automatically update OctoPrint or any installed plugins if the underlying Python environment is older than some threshold, to reduce the likelihood of running into update issues in such outdated environments: [image] OctoPrint 1.7.0 and newer expects these minimum versions, which correspond to the environment found on OctoPi 0.16 or newer: Python: 2.7.13 pip: 19.0.1 setuptools: 40.7.1 If your enviro…

By the way - I recently updated the Python 3 script to update pip as well, but I guess there's a few thousand people who've already used it using an older pip version.

I noticed, after reading this I was about to send you a PR but then saw you had already done the needful