First off - I am new to Raspberry and OctoPrint... but within 2-3h all is working fine, including OctoDash on a touch screen connected to the Pi !

While processing a print job from OctoPrint, my local Ender 3 V2 display (user interface) remains unchanged. It does not show that a print is running, not does it get 'locked' or anything.

Is there not a danger of interfering with an ongoing print ?
Is this just the way it is when piggy backing via USB onto the printer controller ?

I am mainly curious if I missed something. I would be nice if the printer actually showed print mode, progress bar, or at least a 'remote controlled' local warning.

As mentioned above, I have OctoDash anyway beside the printer, still in case I missed or messed-up something it would nice to know for sure.

Raspberry Pi 4B, latest OctoPrint install, OctoDash. Running an Ender 3 V2 with presumably latest firmware... but would have to be verified.

Hello, and welcome in the fantastic world of Octoprinting

Rookie here. I had the same surprise than you, but shortly discovered that what is usually printed on your screen when you print via SD Card is done by the mainboard (the subprogram that reads the .gcode file). Octoprint just send GCODES but prints nothing on the LCD.

Until ... until you ask Octoprint to do so. Also called « Plugins, plugins everywhere ! »

I'm using that one one the Ender 3 : Detailed Progress
I found that the GCODE M73 doesn't work on my Ender 3 Pro (with mainboard 4.2.2). But the rest goes well.

There are a lot of other plugins : Search
("display" and "progress" are probably the best keywords for your search)

As I said the rest works prefect, including 5" touch screen on OcotoPi with OctoDash.
So in many ways its overkill, but i think way more professional if the local printer display
would play along.

after a bit of digging I am starting to understand the issues.

The OctoPrint plugins for printer dialogs do not work with the
Ender 3 V2 firmware / configuration.

The Ender 3 V2 has two components, the main 32bit board, running
a old version of Marlin, plus a independent display board with own
firmware that contains the display 'content'.

Just updating the mainboard, might bring the M117 commands into the
system, but the display controller does not necessarily have the resources
to deal with anything other then what Creality has intended, since the new
Ender 3 V2 display is a full color GUI display, not a char LCD display like
prior versions.

I am compiling a new Ender 3 firmware now to give it a test.... but given that
I can't compile for the display on my own, I have doubts that it will work.

I don't own any Creality printers but from my time in these (and other) forums, I have formed an opinion about their firmware (and it's not favorable).

OctoPrint talks to the printer through the firmware, and the language it uses is gcode, more specifically Marlin (or compatible) gcode. The firmware in the printer is responsible for interfacing with any graphical displays, controls, and any storage media. Marlin has defined multiple gcode commands that are intended to interact with a printer attached graphical display, for example M117 and M73.

If the Creality firmware on the Ender 3 V2 does not take the parameters from these commands and display them on the printer attached screen, there is nothing that can be done except replace the firmware with a version that does.

You are 100% right. While I like the new änder 3 v2, for many reasons, the dual approach of display vs controller is at best difficult.

Also when you see that the firmware is based on a very old version of marlin, despite being the lastest printer version, then that makes me wonder.

It's not rocket science to build this things, at same price point properly, or safely.

Both M command I tested manually via terminal and can't get anything trough, which is sad. It's not that printing directly from slicer via USB or via OctoPrint is new or rare... more like standard by today.

That's why I did not go for the v2, to be honest the "v1" seems to be more roots. That fancy screen did not inspire me much confidence (also about open sourcing the complete code, with firmware). I'm sorry I've overlooked you were running the v2 in my first answer.

Just to be 100% sure : by "just updating the main board", you mean that you tried using the most recent stock firmware, avalaible at Creality ?

Yes indeed I am V2, which is a really pleasant machine in terms of how quiet it is with the 32bit board and drivers, the new screen is very nice to work with too, much better then my older CR10.

Yet they sort of seemed to have jumbled things in a not so sensical way.

I did update only the controller firmware, with non Creality firmware and it works so far. As long as the controller has the latest firmware too there seem to be no problems in printing, but still the M117 codes etc do not work since the controller behaves, but the display remains ignorant for the moment.

I first thought to update the firmware to add a runout sensor and to have better Marlin 2 thermal protections. Until I realized that it is more effective to have this controlled and via the OctoPi, since the GCode is only sent to the Ender control board, so a runout pause would do little.

Any updates on this?

What about mounting the Rasperry pi and the touchscreen in place of the stock LCD?

I am trying to figure out why my ender 3v2 is not giving me changes on the LCD. But it sound like mounting my touchscreen LCD in place of the enders might be pretty great?

I assume you are wondering why the Ender 3 V2 is not showing any print progress when printing via OctoPrint ?
The Ender 3 V2 has a really 'dumb' screen implementation, where the screen has all the graphics and UI stored on board and just receives control commands from the controller board. Versus a real display that is controlled by the main controller.

Hence the UI does not really relate to anything the controller does in terms of executing GCODE and what not, when driven externally.

But out of curiosity... there is no way to get that Ender firmware upgraded for the progress to work properly?

Also... the main thing I was looking for an answer (hope it's ok if I ask a side-question in here): When I connect my raspberry-pi with octoprint to my Ender V2, the display won't shut down any more. Even when I turn off my printer, the display is still on?!? Is that normal? And is there a way to prevent that from happening?

No, that should not be.

This is for a solution/workaround:

First of all this whole tutorial isn't a mandatory mod - you just need it if you run into issues (weird things are happening and you've already ruled out the more common suspects) or if the always running fan and illuminated display (even when the printer is turned off) disturbes you. I'm starting with the why part: If you connect a 3D printer via USB to your Raspberry Pi it can lead to all sorts of power related issues. Most of the time those issues occur only if you turn on your pi before …

The dumb thing is, makers like Creality, could just leave a section of the display, like the lower 20% for status and notification and drive that part by regular GCommands.
Would actually make their own life easier too.
Specially on the Ender 3 V2, you can mess prints up even when just working on the printer it self, by making adjustments while printing.

The vexing part is, nothing in the boards prevents them from writing a firmware that is actually practical, even without hundreds of of hours of code writing.

I know this is an older topic, but I think it might be helpful for future readers. After also being extremely annoyed that I couldn't use the display the way I wanted, I found an extremely helpful github repo by Jyers. He managed to recompile Marlin and the LCD firmware so that you can actually display some status on it. Take a look for yourself. I am so happy to finally use the screen for something useful. 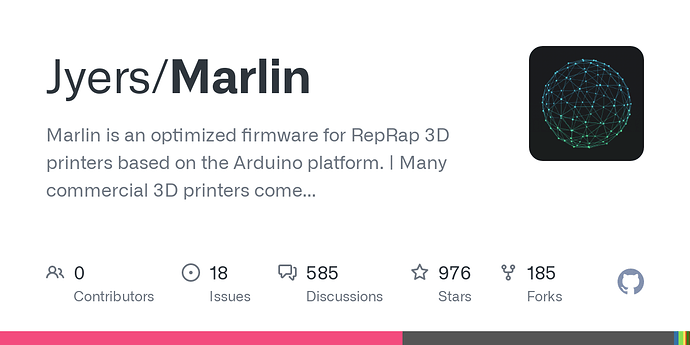 Marlin is an optimized firmware for RepRap 3D printers based on the Arduino platform. | Many commercial 3D printers come with Marlin installed. Check with your vendor if you need source code for yo...

I'm not sure if this is the right place but I have 2 - Ender 3 and an Ender 5. I am running them through OctoPrint. Only one of my printers shows the Printer Display in the bottom left of the browser screen, the other 2 do not. Does anyone know how to get this turned on? Using AutoBim you need this display in order to know how much to adjust the bed.

It's from the 'Display Layer Progress' plugin. Installing that plugin and enabling the printer display in it's settings should be enough.

I will 2nd this recommendation, update your printer and display firmware to Jyers UI and you get status of the print on the LCD screen. And you get an awesome firmware, Arc welder support, BLtouch and UBL and manual mesh support.