Does anyone else get this message when connecting 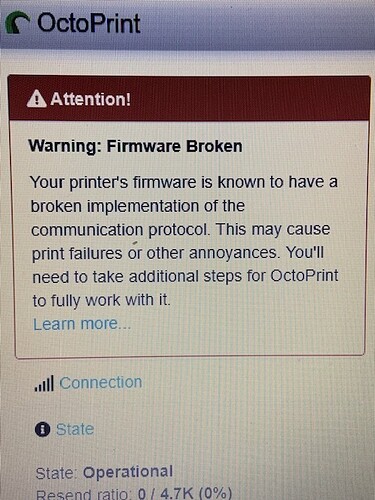 image480×640 107 KB
to your older Ender 3 Pro? Octoprint is working fine is seems, have had a few connection errors but usually restarting printer and pi solves it. Only had it up and running for past 3 days.
Ewald_Ikemann December 26, 2022, 6:20pm #2

Sorry, but this is not a networking issue.

Have you clicked the Learn More link?

I have, it takes me to a link about known SD card issues with certain firmware version. Nothing really about how to solve it? Didn't know if it was worth trying to update my ender 3 Pro firmware or it this pops up on others using octoprint with a Raspberry PI 3b+ and the ender 3 Pro.

If it is taking you to the below post, it contains instructions on a plugin you can install to 'translate' the broken firmware responses into what they should be.

There are firmware variants shipped with some Creality printers that produce broken SD card related messages. Instead of SD as defined in the protocol they are referred to as TF, producing unrecognized messages from the printer. If your Creality printer's SD card is being reported as uninitialized by OctoPrint even though it is inserted and you see error free responses to M21 and M20 in the terminal, your printer's firmware might be affected by this bug. Considering the amount of issues we see …

The warning only pops up after OctoPrint detects an issue trying to communicate with your printer, so it definitely has a problem and looking through some of the forums shows has been an issue for years with Ender printers, there's a lot of replies to one of the topics mentioned in the post above.

And also look up the "tape +5v pin". That also can cause communications and other errors

If you have an Ender3, or Pro, you should really really consider re-flashing the firmware, check the firmware version, some early versions are missing Thermal Runaway protection. This isn't a problem with Octoprint, but with firmware on the board.