I really would like to run octoprint on pi.

I have installed it on pi, and it runs, but randomly stops due to serial exceptions.

I have tried many thing to remedy, but it still gives error and stops printing.

I have a 25mm fan blowing on the cpu and a pi cam v1.2 connected, so my next steps are to remove those and test.

I have octoprint running on linux box at the moment. Running fabulously. Going on a week now. But filament runout is a feature I would like to add, and it seems like, to me the new guy, a better option to use gpio, rather than controller pins.

Any suggestions on what else I can do to figure this out would be greatly appreciated.

You gave us quite a lot of information about what you have and what you did:

Pi isn't powered up right now, and I'm 60mi away from it. Lol I'll send them tonight.

I'm putting in a SKR mini e3 tonight. I've read a couple of posts here that said it solved their problems. Hopefully it does mine as well.

Thank you for you time. I'll reply later with logs.

I apologize for the delay, I got home to the SKR board and was excited to install.

I have attached the last two of each logs. Octoprint & Serial

But, I may have found some smoking guns. When I was disconnecting the wires to change out the board, I found four of the power connections to the board loose. Seemed to be barely tight. One of them, I dont even remember loosening at all. I think it may have been just sitting in the green connector thing.

Thank you for your time
Octoprint logs.zip (5.9 KB)

Sounds good!
If the issue still persists then, you maybe should activate the serial logging:
2019-10-20 04:45:14,399 - serial.log is currently not enabled, you can enable it via Settings > Serial Connection > Log communication to serial.log

Printing all day. Not the same print, but all day. No issues. The loose power connections on the Creality board may have been the problem. Time Will Tell.....

Printed a full week with zero issues. I would say it surely the loose connections on stock creality board.

At this time I have put stock creality board back in, went back to non ferrite USB cable. I started to put stock pi power back in the mix, but if I did that, I wouldn't know which was culprit, usb or power supply.

Going on 2nd day of printing with this setup. I'll give it a couple more days, then I'm calling this mystery solved absolutely.

EDIT: Solved. It had bad power connections on creality motherboard

Had a Pi and OctoPrint work fine, I then added a SKR mini E3 Motherboard to the mix and now my prints dont seem to start (from OP) all the time and if i try cancel the print job Octoprint it freezes. I also have a "TMC Connection error" on the Ender3 display, im running the latest v1.2 firmware for the SKR Mini E3 version from Github, ther are times it dispears and im not sure why. Any suggestions, Im consider switching back to my old Ender3 motherboard.If I remove the USB cable for OP, the error doesnt appear. Help!

The main issue is the instabiloity of OP wiht this new Moptherboard. Its bad it almost impossible to print anything.

That's a hardware/firmware error. If the latest firmware didn't help, you should contact bigtreetech.

If you google for "TMC Connection error" you will see that you're not alone with this issue.

edit: just found this post SOLVED: Tracking down issue with Pi4/0.17
Maybe this solution works for you too

your the first person thats respond to me in the last three days since post on this topic across 3 diffrent platforms.

Thanks for advice, what files would i put on the SD card? I have only used my ender3 pro with the usb running OctoPrint from the onset. So I have no idea what to put on the SD card. Im thinking im going to return the SKR.

Tbh I'm not sure

I guess he used either an empty card or one with a few random gcode files on it.
Crossing my fingers

I have found a workaround with help from a guy on YouTube, a workaround is to unplug the Pi when booting the SKR from cold, simply plugging in the USB cable after, OctoPrint works fine and there is no Errors.

So, this a boot issue with the SKR. With how or what it is expecting to load when the USB cable is plugged in. @bigtreetech can you guys look at fixing this issue please!

But I doubt that they will read your question here

Just got another idea:
May I ask you to try this? Put tape on the 5V pin - Why and how

Ive posted on there Github and here

I will try and get back to you on this today. Seems like a siple fix for a number of issues that Im seeing. The always on screen is a pain and this seems like such a obvious fix. Great find!

So, I updated my USB cable as suggested, Put tape on the 5V pin - Why and how 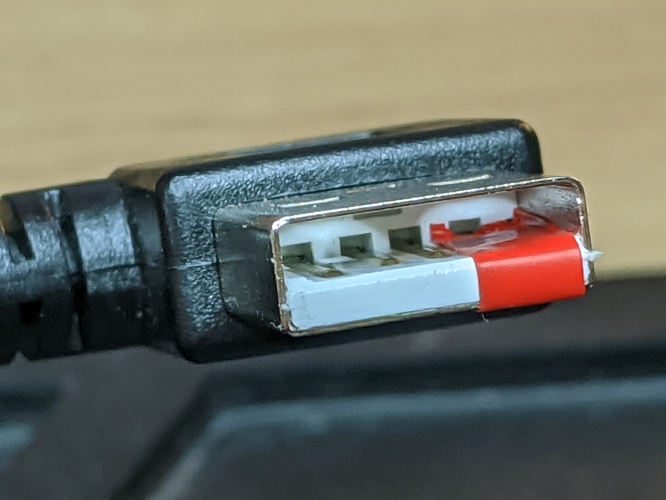 The E3 LCD turns off as described, fantastic! I will monitor this over the coming days to see if there are any improvements in stability from a print perspective and I also no longer get the “TMC Connection error” on the LCD.

That said, I do get this error in the OctoPrint mobile app and web interface " State: Offline (Error: SerialException: 'device reports readiness to read but returned no data (device disconnected or multiple access on port?)' @ comm.py:_readline:2793)", which would make sense as the printer can no longer get any info from the board as its powered off. That all said, the interface is interactive from settings perspective, if you want to print you will need to power up the Printer from the Web interface or App.

You might want to read through the thread that's referenced here.

Thanks for that, but it seems heavy handed and more costly than a slice of tape

As you can see the interface works well now, 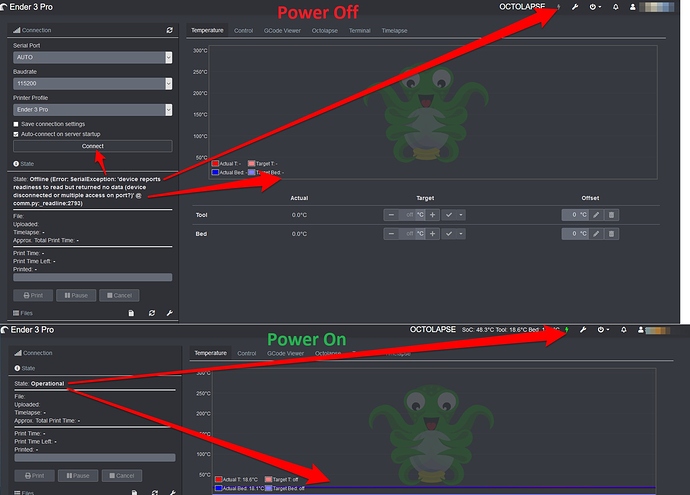 That said, I do get this error in the OctoPrint mobile app and web interface " State: Offline (Error: SerialException: 'device reports readiness to read but returned no data (device disconnected or multiple access on port?)' @ comm.py:_readline:2793) ", which would make sense as the printer can no longer get any info from the board as its powered off.

You did say that which looks a lot like this which I saw on my own printer board. So the thread suggestion where we're talking about all this is a work-in-progress to produce a smarter adapter/cable within this space.